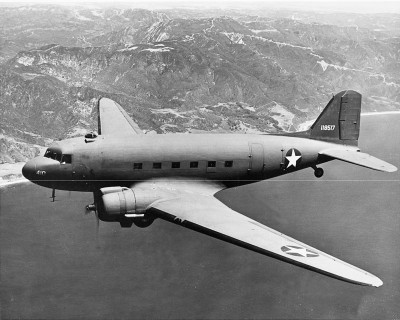 When the Douglas C-47's ancestor, the Douglas DST (Douglas Sleeper Transport) first took to the air on December 17, 1935, Donald Douglas and his supremely competent crew looked forward to selling perhaps as many as 400 of the comfortable airliners over the next several years.

Not one of them, not Douglas, the company founder, nor Arthur Raymond, his chief engineer, nor Carl Cover, the chief test pilot, could have imagined that more than 13,000 of the type would be built, and that it would become one of the most effective warplanes in history.

Developed into the 21-passenger DC-3, the twin-engine beauty from Santa Monica revolutionized the world of air transport, becoming the best-selling airliner of its day. By 1940, a total of 430 DC-3s were carrying 90 percent of the world's airline travelers. The DC-3 had placed the United States well in the lead in commercial aviation, a position the nation would retain for the rest of the century, and beyond.

The U.S. Army Air Corps had watched the development of Douglas airliners and had purchased small numbers of the earlier military versions including the C-32, C-33, C-34, C-38, C-39, C-41, and C-42. (Ultimately, there would be more than 60 different designations assigned to variations of the basic design.)

The C-41 served as a test bed for the Army Air Corps' first order of 953 C-47s, which were built in a new Douglas plant in Long Beach, California. The all-metal Douglas C-47 featured strengthened floors, bucket seats, large loading doors, and a pair of sweet-running Pratt & Whitney R-1830 engines of 1,200 horsepower each. From that point, orders swelled so that a second factory had to be built in Tulsa, Oklahoma.

Many Douglas C-47s were sold as surplus following the war. Others were retained in active service for decades. During the Vietnam War, Douglas C-47s were modified for service as low-flying, heavily armed gunships, picking up the designation AC-47.
h

Variants of the basic aircraft were used by all the military services of the United States and by almost every Allied nation. Even the Luftwaffe flew the doughty Douglas design, using aircraft impressed from airlines of occupied countries.

Move on to the next section to find specifications for the Douglas C-47.

A team of men led by USAF Captain Ronald W. Terry would turn the lovable Gooney Bird into one of the most fearsome warplanes in history.

Quickly tested and pressed into service, the AC-47s were flown in orbit over the beleaguered hamlets, laying down a withering 18,000 round-per-minute cone of fire that beat off attacks and earned the plane a new nickname -- "Puff the Magic Dragon."

Operating under the call-sign "Spooky," the AC-47s became indispensable, and it was their proud boast that no South Vietnamese position was ever lost when a gunship was on duty overhead. Although supplemented by later AC-119 and AC-130 gunships, the South Vietnamese operated Spookys until the end of the war in 1975. 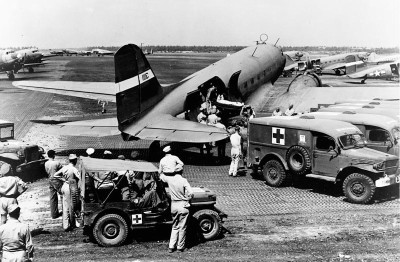 Troops, arms, food, and, as here, the wounded -- Douglas C-47s carried them all. "Aeromedical evacuations" such as this were, for injured soldiers, the first leg of long journeys to safety and, sometimes, home.
g

The versatile Douglas C-47 could be used for troop and cargo transport, dropping paratroops, towing a glider, medical evacuation, and virtually any other task assigned to it. It was turned into a troop-carrying glider by the removal of its engines and into a seaplane by the addition of huge floats manufactured by the EDO company.

The Dougas C-47 operated under all weather conditions on every continent around the world, and it did so with a grace and rugged reliability that made it a favorite of pilots and mechanics alike. One of the results of this affection was its many nicknames, the most enduring of which was "Gooney Bird."

When World War II ended, it would have been reasonable to expect the Douglas C-47 to serve for a few more years and then retire, going the way of the B-17s, P-47s, and other combat veterans. Many were retired, but instead of going to some boneyard for salvage, some were refurbished and became the nucleii of many airline start-ups. Available at bargain prices from U.S. government surplus sales, they had a stultifying effect upon the sale of new transport designs.

A Douglas C-47 attached to the Air Transport Command of the U.S. Army Air Forces stands at the ready in India in 1945. This plane would be loaded with supplies needed by American troops in China.
f

New aircraft like the Convair 240 and Martin 404 had moderately better performance than the Douglas C-47, but were far more expensive to purchase and operate. As a result, the converted C-47s were mainstays of smaller airlines for many years. Other uses were found for the aircraft over time, and it has been successfully modernized with turbo-prop engines by several companies.

Flights from India to China were treacherous, taking Douglas C-47s over the Himalayas, where there was no place to land, and no turning back. The Chinese airfields that awaited the transports were regularly bombed and strafed by Japanese planes, so few landings were routine.
h

Despite the age of the Douglas C-47s, almost every air force retained many of the craft in active service. The plane soldiered on, performing well for the United States during the 1948 Berlin Airlift, in Korea, and in Vietnam. The C-47's longevity derived from the conservative Douglas engineers building in more strength than was necessary, endowing the airplane with a virtually unlimited service life. No wonder it earned General Dwight D. Eisenhower's praise as one of the five most important weapons of World War II.