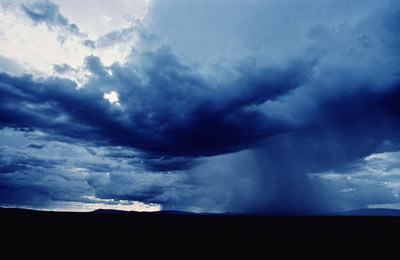 The water cycle is the continuous movement of water in and around the Earth. As previously mentioned, water never really goes away -- it just changes form. The sun drives the entire water cycle and is responsible for its two major components: condensation and evaporation. When the sun heats the surface of water, it evaporates and ends up in the atmosphere as water vapor. It cools and rises, becoming clouds, which eventually condense into water droplets. Depending on the temperature of the atmosphere and other conditions, the water precipitates as rain, sleet, hail or snow.

Some of this precipitation is captured by tree canopies and evaporates again into the atmosphere. The precipitation that hits the ground becomes runoff, which can accumulate and freeze into snow caps or glaciers. It can also infiltrate the ground and accumulate, eventually storing in aquifers. An aquifer is a large deposit of groundwater that can be extracted and used. This runoff also comes from snowmelt, which occurs when the sun and climate changes melt snow and ice. Finally, some of this runoff makes it way back into lakes and oceans, where it is again evaporated by the sun. You can learn more about the water cycle in How the Earth Works.

Groundwater may also exist on other planets. Images from the Mars Global Surveyor spacecraft show what looked like gullies carved out by rivers of water on the surface of the planet. According to NASA, the water is probably 300 to 1,300 feet (100 to 400 meters) below the surface. Europa, one of Jupiter's moons, may also have subsurface water. As our need for water outweighs the Earth's supply, scientists wonder if we may one day mine for water on the other planets and moons in our solar system.

Water has a lot of unique and amazing properties that make it so important to life. They're why we're constantly looking for better ways to obtain and conserve it. In the next section, we'll look at these properties and learn more about water itself.