A Rogue by Definition 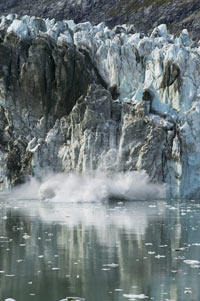 Glacial calving can cause enormous waves, but they're not considered rogue waves.
© Photographer: Ironrodart | Agency: Dreamstime

There are many kinds of ocean waves, and some of them are definitely huge. However, not all large waves are rogue waves. Strong storms, such as hurricanes, can cause large waves, but these waves tend to be relatively regular and predictable, though certainly capable of causing serious harm to ships and coastal areas. Undersea earthquakes, coastal landslides and glacial calving (when a large chunk of a glacier breaks off and falls into the ocean) can also create enormous and catastrophic waves. Undersea earthquakes can produce tsunamis, and coastal landslides can produce tidal waves. These could be considered rogues, but, to a certain extent, they are predictable -- as long as someone noticed the event that caused them. So, that pretty much rules them out of rogue status.

A true rogue wave arises seemingly out of nowhere and is significantly higher than the other waves occurring in the area at the time. Exactly how much higher is open to interpretation -- some sources suggest anything twice as large as the current significant wave height is a rogue, while others think anything 33 percent larger counts. It is probably sufficient to say that any wave so large that it is unexpected based on current conditions can be counted as a rogue. A craft navigating 3-foot waves could encounter an 8-foot rogue wave -- while not a record-breaker, it would certainly cause problems for a small boat.

Rogue waves also tend to be steeper than most waves. The average ocean waves may take the form of massive swells, allowing vessels to maneuver up and down them even if they are many feet high. By contrast, consider this report of the Queen Elizabeth II's encounter with a freak wave:

At 0410 the rogue wave was sighted right ahead, looming out of the darkness from 220°, it looked as though the ship was heading straight for the white cliffs of Dover. The wave seemed to take ages to arrive but it was probably less than a minute before it broke with tremendous force over the bow [source: Science Frontiers].

The phrase "wall of water" is very common in rogue wave reports -- they are usually much steeper than other waves, and therefore slam into ships with tremendous force, often breaking over them.

While scientists have gained a greater understanding of rogue waves in the last decade, they are still quite enigmatic. No one has ever ­filmed the formation of a rogue wave in the ocean or followed one through its entire life cycle. There are very few photographs of rogue waves. For centuries, the best evidence for their existence was anecdotal -- the countless stories told by sailors who had survived one.

Gallimore and another crewman were in the wheelhouse. The wind had been blowing fiercely at 100 knots for more than a day, and "Lady Alice" was struggling in rough seas with waves 16 to 23 feet high … At 8:00 A.M. Gallimore looked up and saw a huge wall of water bearing down on "Lady Alice." From his view in the wheelhouse, he could not see the top of the wave …The wave crashed down on top of the wheelhouse, driving the vessel underwater …The crewman in the wheelhouse with him was thrown down with such force that he suffered two fractured vertebrae. To top the radar antennas with enough force to rip them from the steel mast where they are bolted … the wave had to be 40 feet or higher [source: Smith, 195].
The Explorer

In January 2005, the Explorer, a 591-foot research vessel, was struck by a 50-foot rogue wave in the Pacific Ocean. The wave disabled much of the ship’s equipment, including three of four ­engines. Those on board suffered only minor injuries, and the ship made it to Hawaii for repairs. Had the wave been larger, almost 1,000 people could have died [source: The Denver Channel]. ­