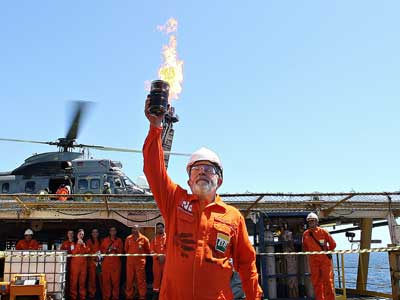 Finding new offshore petroleum isn't a simple task. Most of the world's oil and natural gas is trapped between 500 and 25,000 feet (150 and 7,620 meters) under dirt and rock. In some cases, petroleum leaks through the ocean floor and can be detected with special sniffer detectors. Most of the time, however, survey teams have to depend on special seismic and magnetic survey equipment to detect telltale disturbances in the Earth's crust. These efforts cost the oil industry billions of dollars, and even then it takes some exploratory drilling to determine how profitable a production well might be.

­But when these eff­orts pay off in the form of a rich offshore reserve of oil, the impact can be immense. Brazil's national oil company Petrobras made just such a discovery in 2007, when the company found an estimated 5 to 8 billion barrels worth of oil and gas in the Tupi field [source: BBC News]. The discovery earned Brazil the fourth spot on our list.

Tupi field is located around 155 miles (250 km) off the southern coast of Brazil in the Santos geological basin, which, in turn, is part of a larger complex that includes the Campos and Espirito Santo seafloor basins. Various officials predict these reservoirs may hold anywhere between 50 and 100 billion barrels of petroleum [source: IPS News].

Combined with the country's existing reserves of 13.8 billion barrels, these discoveries have the potential to elevate Brazil to one of the top 10 oil producers in the world, alongside the likes of Kuwait and Venezuela [source: IPS News].

But to move up in the global oil market, Brazil first has to establish enough platforms in the region to permit full-scale production -- a project that will cost billions, especially given the depth and weight of the petroleum deposits.

Ownership of the Santos, Campos and Espirito Santo basins is a clear-cut issue. After all, the areas fall within the limits permitted by the U.N.'s Law of the Sea treaty. But what happens when potential oil fields pop up in more contested waters?

In the next section, we'll travel all the way to the North Pole.