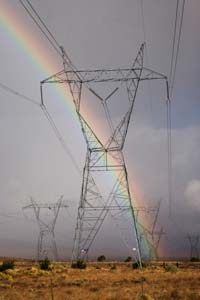 How can we run this world on renewable power sources? Naturally, the problem raises quite a few fears and concerns.
Jeremy Woodhouse/Digital Vision/Getty Images

Residents of the early 21st century live in quite an exciting time. We have a thriving Internet culture, an unprecedented understanding of the natural world and we can even watch episodes of "America's Next Top Model" on our mobile phones.

But of course, the world is ever in transition, and we currently find ourselves suspended between two ages: a time dependent on fossil fuels such as oil and coal, and a future dominated by renewable energy sources. Yet not everyone is sold on this vision. Options vary on just how dependable some of these renewable energy sources are, as well as how well they'll be able to sustain us in a post-fossil fuel era.

Indeed, it's a lot like leaving the leaky, polluting and ultimately doomed tugboat we know for the sleek, green, carbon neutral sloop that we don't. Sure, the ideas behind the new boat are encouraging, but we still want to stay above water -- and we'd like to bring all our things with us too.

Out of all this uncertainty, a number of myths, misconceptions and outright lies have risen to the surface. In this article, we'll forgo the loonier notions out there concerning new world orders and Area 51 battery packs. Instead, we'll look at five of the bigger renewable energy myths currently making the rounds.