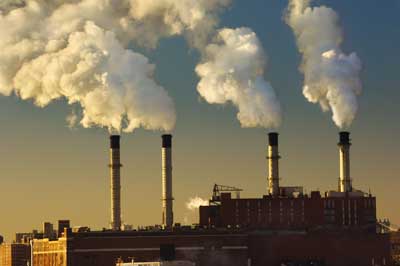 Carbon capture has actually been in use for years. The oil and gas industries have used carbon capture for decades as a way to enhance oil and gas recovery [source: CSS]. Only recently have we started thinking about capturing carbon for environmental reasons.

Currently, most research focuses on carbon capture at fossil fuel-powered energy plants, the source of the majority of man-made CO2 emissions. Many of these power plants rely on coal to create energy, and the burning of coal emits CO2 into the atmosphere. Some researchers envision a future where all new power plants employ carbon capture.

There are three main steps to carbon capture and storage (CCS) -- trapping and separating the CO2 from other gases, transporting this captured CO2 to a storage location, and storing that CO2 far away from the atmosphere (underground or deep in the ocean). Let's take a more detailed look at the trapping and separation process­:

With post-combustion ­carbon capture, the CO2 is grabbed after the fossil fuel is burned. The burning of fossil fuels­ produces something called flue gase­s, which include CO2, water vapor, sulfur dioxides and nitrogen oxides. In a post-combustion process, CO2 is separated and captured from the flue gases that result from the combustion of fossil fuel. This process is currently in use to remove CO2 from natural gas. The biggest benefit to using this process is that it allows us to retrofit older power plants, by adding a "filter" that helps trap the CO2 as it travels up a chimney or smokestack. This filter is actually a solvent that absorbs carbon dioxide. The solvent can later be heated, which will release water vapor and leave behind a concentrated stream of CO2.­ Post-combustion carbon capture can prevent 80 to 90 percent of a power plant's carbon emissions from entering the atmosphere [source: GreenFacts]. But the post-combustion process requires a lot of energy to compress the gas enough for transport.

With precombustion carbon capture,­ CO2 is trapped before the fossil fuel is burned. That means the CO2 is trapped before it's diluted by other flue gases. Coal, oil or natural gas is heated in pure oxygen, resulting in a mix of carbon monoxide and hydrogen. This mix is then treated in a catalytic converter with steam, which then produces more hyd­rogen, along with carbon dioxide. These gases are fed into the bottom of a flask. The gases in the flask will naturally begin to rise, so a chemical called amine is poured into the top. The amine binds with the CO2, falling to the bottom of the flask. The hydrogen continues rising, up and out of the flask. Next, the amine/CO2 mixt­ure is heated. The CO2 rises to the top for collection, and the amine drops to the bottom for reuse [source:­ Allen]. The excess hydrogen also can be used for other energy production processes.

With oxy-fuel combustion carbon capture, the power plant burns fossil fuel in oxygen. This results in a gas mixture comprising mostly steam and CO2. The steam and carbon dioxide are separated by cooling and compressing the gas stream. The oxygen required for this technique increases costs, but researchers are developing new techniques in hopes of bringing this cost down. Oxy-fuel combustion can prevent 90 percent of a power plant's emissions from entering the atmosphere [source: GreenFacts].

Once the carbon is captured, how is it transported to a storage location? Keep reading to find out.

Georgia Institute of Technology researchers think they have found a way to create a zero-emissions car -- one free of fossil fuels and carbon dioxide emissions. They envision hydrogen-powered cars with onboard processors to separate the hydrogen and the CO2. The recycled hydrogen would continue powering the vehicle, while the CO2 would be stored in liquid form until its removal at a fueling station. Researchers are working on a long-term strategy where the car's engine would recycle the CO2 as well, creating a closed-loop system [source: Georgia Tech].