Browse the article How can adding iron to the oceans slow global warming? 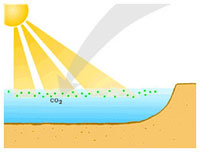 Global warming has become one of the leading issues of the 21st century. As scientists predict more ominous scenarios, like Florida being underwater within decades, people are demanding action.

Enter forward-thinking scientists and companies like Planktos and Climos, who propose adding iron to the world's oceans to reduce atmospheric carbon dioxide levels and, in turn, to decrease temperatures. The idea of dumping iron in the oceans to lower temperatures has been around since the late 1980s and has been known variously as carbon sinking, ocean seeding or iron fertilization.

The premise is act­ually simple. Iron acts as a fertilizer for many plants, and some, like the phytoplankton that form the base of the marine food web, need it to grow. Adding iron to the water stimulates phytoplankton growth, which in turn gobble up carbon dioxide through photosynthesis. The resulting decrease in carbon dioxide is supposed to help reduce temperatures since carbon dioxide is one of the main gases responsible for trapping ­heat on the earth's surface through the greenhouse effect.

Numerous iron dumping trials have been conducted since oceanographer John Martin suggested the idea more than 15 years ago [source: Haiken]. One trial conducted in 2004 indicated that each atom of iron added to the water could draw between 10,000 and 100,000 atoms of carbon out of the atmosphere by encouraging plankton growth [source: Schiermeier]. Some scientists theorize that adding iron to the Southern Ocean alone could reduce carbon dioxide levels by 15 percent [source: Schiermeier].

Scientist Oliver Wingenter suggests a more cautious approach, arguing that adding massive amounts of iron to the ocean could cause a major cooling of more than 10 degrees Celsius [source: Wingenter]. He recommends fertilizing just 2 percent of the Southern Ocean to cause a 2 degree Celsius cooling and to set back the tipping point of global warming 10 or more years [source: Wingenter].

Instead of focusing on cutting carbon dioxide levels, Wingenter's research concentrated on increasing other gases that result from the phytoplankton blooms, namely dimethyl sulfide, or DMS. DMS is largely responsible for cloud formation in the polar region and could increase cloud reflectivity, which would in turn reduce temperatures. During his iron fertilization experiments, Wingenter found that adding iron increased the concentration of DMS five-fold [source: Wingenter].

Still other scientists suggest avoiding using the ocean as a testing ground. Learn more about their concerns on the next page. 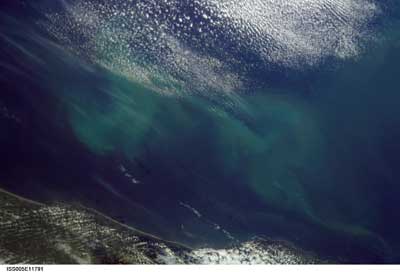 The two cloudy green masses in the center of this satellite photo are large patches of phytoplankton.
Photo courtesy NASA

As you might suspect, adding iron to the oceans could do more than just reduce carbon dioxide levels. Changing the structure of the food web by infusing the ocean with iron and promoting phytoplankton growth could drastically change the concentrations of other gases in both the air and the sea, potentially negating any positive effects of reduced carbon dioxide levels [source: Liss]. For example, some computer models predict that adding iron could increase levels of nitrous oxide and methane, two greenhouse gases [source: Haiken]. Scientist Mark Lawrence also points out that blooms of phytoplankton produce chemicals called methyl halides, which erode the ozone layer [source: Wright].

Scientists also don't know how long any carbon dioxide that is captured by the phytoplankton would be stored. While the ocean has the ability to stockpile millions of tons of the gas for a century or more, there's a catch: It must sink below the surface if it stays in solid form. But it doesn't necessarily do that.

Many environmental organizations are also against ocean seeding. When the company Planktos announced plans to sprinkle 100 tons of iron sulfate off the coast of the Galapagos Islands, t­he Natural Resources Defense Council, the World Wildlife Fund, Friends of the Earth, Greenpeace and others fought back. One group even threatened to intercept the company's ship. Planktos ended up canceling its plans due to limited funding and inadequate gear, but the environmental groups remain­ on guard. On its Web site, the World Wildlife Fund warns of the following potential ill effects the method could incite:

Iron fertilization raises a lot of interesting questions. The relationship between the carbon dioxide cycle and marine processes is complex, and so far science isn't clear on the long-term effects of altering it. Is iron fertilization a global warming panacea or a Pandora's box? Only time will tell, but scientists are sure to keep searching for answers. To learn more about global warming and possible carbon sequestration strategies, be sure to explore the links on the following page.