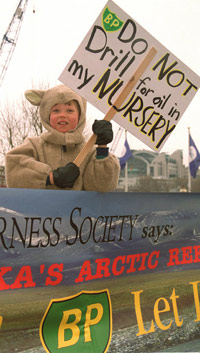 Protests like this one over proposed Arctic oil drilling in 2000 could have little, if any, impact on the peak oil crisis.
Hugo Philpott/AFP/Getty Images

The peak oil dilemma is one of those debates where for every solution raised, three more problems crop up as a result. Take the Arctic oil reserves, for example. If we begin to run out of oil and demand remains the same or increases, governments may be forced to relax regulations concerning drilling in the fragile Arctic ecosystem. As a result, species extinction could be accelerated by the impact oil drilling would have there.

This is but one pr­oblem that could arise from peak o­il. Petroleum is used in a wide array of products -- including medicine and food. It’s also used as fuel to get us to and from jobs (where we make those products). In the United States in 2005, 67 percent of all petroleum consumed was used for transportation [source: EIA]. Even the tanker trucks and ships that transport oil use it as a fuel source. Oil is arguably the lifeblood of the global economy, and we’re at a point where, without it, the world would suffer tremendous economic damage.

But if future oil production is threatened, why don’t we just ramp up our alternative fuel research? This leads us to another problem with a peak oil scenario. Worldwide research and investment into alternative energy sources are at an all-time high, but the progress being made remains a drop in the oil barrel compared to the amount of energy needs alternative fuels would have to satisfy in order to support an oil crisis like a peak. In other words, we just don’t have the capacity to produce enough alternative fuel to make up for a major loss of oil production.

Cellulosic ethanol -- fuel produced from the carbohydrates found in plants like switchgrass -- shows a great deal of promise. But the process of refining fuel from grass is still expensive; it still lacks a major breakthrough in the production technique that could reduce costs. And it’s highly corrosive, much more so than gasoline. This means that gas stations would have to retrofit their pumps and storage tanks at a cost the Department of Energy estimates could be around $100,000 per gas station [source: GAO].

Additionally, alternative fuels are in direct competition with oil for investment money. If more money is poured into developing alternative fuels, less may make its way into finding more oil fields or refining processes like extraction from oil shale. Jumping the gun and focusing on alternative fuels too early could also damage economies that heavily rely on petroleum. The trick is to get as much out of oil as possible without waiting too long.

Ethanol isn’t the only alternative fuel source currently suffering challenges to its progression. Even coal, a fossil fuel in wide use, has its problems. Some people see this fuel as the likeliest answer to the peak oil crisis. Many power plants are already fueled by coal, and the process of making liquid coal has been mastered. This process produces fuel that doesn’t need to be refined and can power current vehicles.

But coal is also extremely dirty. One ton of coal -- including the fossil fuels used to mine, transport and produce it -- puts out about two tons of carbon dioxide emissions when used conventionally. And it’s estimated that a car using liquid coal as fuel would emit 4 to 8 percent more greenhouse gas emissions than one running on gasoline [source: Scientific American].

It seems like every way you look at it, the peak oil theory is nothing but bad news. But there appears to be nothing worse than doing nothing. Read about this scenario on the next page.