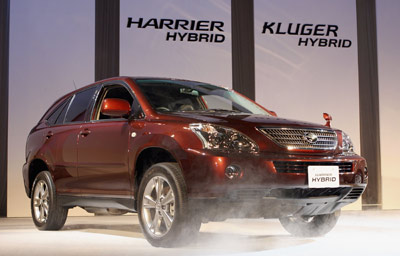 The Hirsch Report, issued in 2005, said that improving fuel efficiency -- for example, through increased production of cars that get high gas mileage like the Toyota Harrier hybrid -- would help decrease demand for oil and help mitigate the peak oil crisis.
Koichi Kamoshida/Getty Images

While solutions meant to alleviate a shortfall face many challenges ahead, doing nothing is the worst option, according to "Peaking of world oil production: Impacts, mitigation and risk management." This influential 2005 study of a peak oil crisis has become the de facto peak oil adherents' bible. This study, dubbed the Hirsch Report after its main author, researcher Robert L. Hirsc­h, examined three scenarios: one where no steps are taken to offset a peak until the peak occurs, one where steps to mitigate a crisis are instituted 10 years before the peak, and one where mitigation is put into practice 20 years before peak.

The Hirsch Report concluded that mitigation -- taking steps to both expand supply through the introduction of alternative liquid fuels, as well as decrease demand by increasing fuel efficiency -- 20 years before peak would help us make a smooth transition to other fuels. This would minimize the economic or sociopolitical consequences when the oil peak takes place.

­However, mitigation measures begun 10 years before the peak would place the globe into a fuel supply shortfall that we would not be able to restore for about a decade. And mitigation measures that aren't taken until the peak occurs would create a 20-year-long global fuel shortage. Couple this with the Hirsch Report's conclusion that "[m]itigation will require a minimum of a decade of intense, expensive effort" [source: Hirsch, et al.] and Hirsch's idea that the peak will come within 20 years of 2005, and you can understand why peak oil makes a lot of people very nervous.

So have we reached peak oil? Ironically, if it has occurred, it will be impossible to tell until a few years afterward. Although it may seem that the planet's oil resources have been tapped, future exploration may find new superfields. Or if economic expansion in India and China slows, that could ease the strain on the world's petroleum needs and put off the peak. A sudden burst in technological advancement in switchgrass ethanol could also mitigate the demand. Eventually, however, it will become statistically impossible for oil production to ever catch back up to demand. Once this has occurred, we will know that we have already reached and passed peak oil.

Whether or not you sleep well at night could depend on which view you hold over peak oil. Those who hold an optimistic view don't necessarily believe that oil production follows the curve predicted by M. King Hubbert. Instead, they believe that around 2030 oil production will begin the "undulating plateau" envisioned by CERA and continue indefinitely as other energy sources take up the slack. Like climate skeptics, critics of the peak oil theory feel that our outlook isn't so bleak.

To peak oil adherents, however, the future is dire. In fact, it may already be too late. We may have already reached peak oil production and are in the few-year period before it becomes painfully clear it has taken place. Others see the peak taking place as soon as 2011. Even the most conservative peak oil adherents don't place the peak any further out than 2040.

Both sides believe in taking steps to offset an eventual failure for oil production to meet demand. It's exactly when these steps should be taken that is such a point of contention. It's a tricky situation every person on Earth faces. As the Hirsch Report put it, "[t]he peaking of world oil production presents the U.S. and the world with an unprecedented risk management problem."

For more information on oil and other related topics, visit the next page.