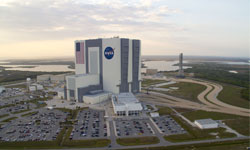 You may already be aware of the many amazing products that were invented as a result of NASA research (and no, Tang isn't one of them). After all, NASA doesn't just exist to explore space -- since its creation in 1958, the organization's mission has also been to find ways of improving our lives here on Earth. NASA works with a number of companies and research teams across the country to develop concepts that advance technology in a variety of fields, from healthcare to entertainment. Since 1976, NASA has even published a journal called "Spinoff," which details the various commercial products and technologies that started out as NASA ideas.

The fact that some of this technology led to great, everyday products makes perfect sense -- you can probably see a correlation between NASA applications and things like improved telecommunications, memory foam mattresses and cordless power tools. However, sometimes NASA technology turns up in the strangest of places, or is implemented in unusual ways that probably never crossed the minds of the researchers who first came up with the concept.

In this top five, we'll look at some of the stranger items developed from NASA technology.