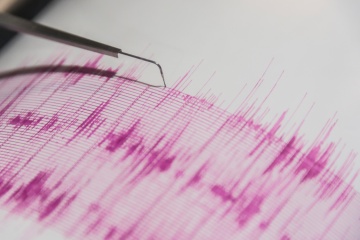 A seismometer is hard at work detecting what's shaking with the ground.
Gary S Chapman/Getty Images

On the last page, you learned that there are three different types of seismic waves, and that these waves travel at different speeds. While the exact speed of primary waves (P waves) and secondary waves (S waves) varies depending on the composition of the material they're traveling through, the ratio between the speeds of the two waves will remain relatively constant in any earthquake. P waves generally travel 1.7 times faster than S waves [source: Stein].

Using this ratio, scientists can calculate the distance between any point on the Earth's surface and the earthquake's focus, the breaking point where the vibrations originated. They do this with a seismograph, a machine that registers the different waves. To find the distance between the seismograph and the focus, scientists also need to know the time the vibrations arrived. With this information, they simply note how much time passed between the arrival of both waves and then check a special chart that tells them the distance the waves must have traveled based on that delay.

If you gather this information from three or more points, you can determine the location of the focus through a process called trilateration. Basically, you draw an imaginary sphere around each seismograph location, with the point of measurement as the center and the measured distance (let's call it X) from that point to the focus as the radius. The surface of the circle describes all the points that are X miles away from the seismograph. The focus, then, must be somewhere along this sphere.

If you come up with two spheres, based on evidence from two different seismographs, you'll get a two-dimensional circle where they meet. Since the focus must be along the surface of both spheres, all of the possible focus points are located on the circle formed by the intersection of these two spheres. A third sphere will intersect only twice with this circle, giving you two possible focus points. And because the center of each sphere is on the Earth's surface, one of these possible points will be in the air, leaving only one logical focus location.

Besides determining the origin of the earthquake, scientists also want to measure its strength. Find out more about the Richter scale on the next page.