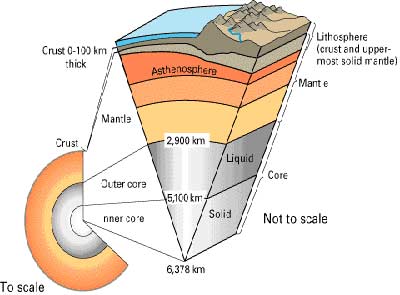 The first question this raises is: what exactly is this "material from the inside"? On our planet, it's magma, fluid molten rock. This material is partially liquid, partially solid and partially gaseous. To understand where it comes from, we need to consider the structure of planet Earth.

The earth is composed of many layers, roughly divided into three mega-layers: the core, the mantle and the outer crust:

In the 1960s, scientists developed a revolutionary theory called plate tectonics. Plate tectonics holds that the lithosphere, a layer of rigid material composed of the outer crust and the very top of the mantle, is divided into seven large plates and several more smaller plates. These plates drift very slowly over the mantle below, which is lubricated by a soft layer called the asthenosphere. The activity at the boundary between some of these plates is the primary catalyst for magma production.

Where the different plates meet, they typically interact in one of four ways: