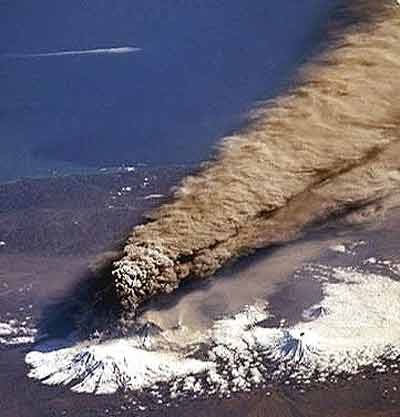 Within these two broad eruption categories, there are several typical eruption varieties. The most common eruption types are:

Plinian Eruptions: These awesome eruptions can inflict serious damage on nearby areas -- the eruption that buried Pompeii and Herculaneam was a Plinian eruption. They are initiated by magma with very high viscosity and gas content. The powerful upward thrust of the expanding gases propels pyroclastic material as high as 30 miles (48 km) in the air, at hundreds of feet per second. The eruption, which can last hours or even days, produces a towering, sustained eruption plume. This dumps a huge amount of tephra, fallen volcanic material, on surrounding areas (usually more to one side, depending on how the wind blows). Additionally, a Plinian eruption can produce extremely fast moving lava flows that destroy everything in their path.

Hawaiian Eruptions: Generally, these eruptions are not very destructive or explosive. They don't thrust much pyroclastic material into the air, producing instead a relatively sluggish flow of low-viscosity, low-gas-content lava. This flow can take a couple of different forms. The most impressive display is the fire fountain, a fountain of bright orange lava pouring hundreds of feet in the air, for a few minutes or sometimes several hours. The more typical eruption style is a steady lava flow from a central vent, which can produce wide lava lakes, ponds of lava forming in craters or other depressions. Lava flows and spatter from fire fountains can certainly destroy surrounding vegetation or trees, but the flow is usually slow enough that people have plenty of time to make it to safety. Hawaiian eruptions are so named because they are common to Hawaii's volcanoes.

Strombolian Eruptions: These eruptions are fairly impressive but not particularly dangerous. They thrust small amounts of lava 50 to a few hundred feet (15 to 90 meters) in the air, in very short bursts. The lava has a fairly high viscosity, so gas pressure has to build to a high level before it will thrust the material upward. These regular explosions can produce impressive booming sounds, but the eruptions are relatively small. Strombolian eruptions generally don't produce lava flows, but some lava flow may follow the eruption. These eruptions produce a small amount of ashy tephra.