Other Types of Eruptions 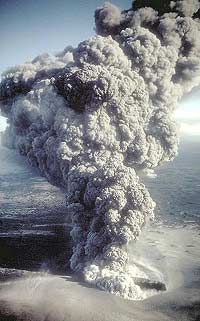 A hydrovolcanic eruption from Ukinrek Volcano, off the coast of Alaska.
Photo courtesy USGS

Hydrovolcanic Eruptions: When volcanic eruptions occur near oceans, saturated clouds or other wet areas, the interaction of water and magma can create a unique sort of eruptive column. Basically, the hot magma heats the water so that it becomes steam. This rapid change of state causes an explosive type of expansion in the water, which breaks apart the pyroclastic material, creating a fine ash. Hydrovolcanic eruptions vary considerably. Some are characterized by short bursts, while others build sustained eruptive columns. Volcanic eruptions can also melt large amounts of snow, causing mudslides and major flooding.

Fissure Eruptions: Not all eruptions start with an explosion caused by gas pressure. Fissure eruptions occur when magma flows up through cracks in the ground and leaks out onto the surface. These often occur where plate movement has caused large fractures in the earth's crust, and may also spring up around the base of a volcano with a central vent. Fissure eruptions are characterized by a curtain of fire, a curtain of lava spewing out to a small height above the ground. Fissure eruptions can produce very heavy flows, though the lava is generally slow moving.