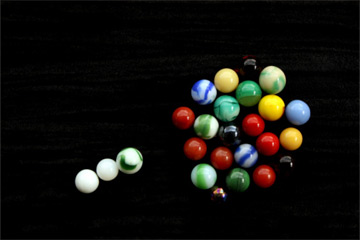 If you think of critical mass in terms of marbles, the tight formation of marbles represents critical mass and the three lone marbles stand in for neutrons.
iStockphoto/Thinkstock

In a fission bomb, the fuel must be kept in separate subcritical masses, which will not support fission, to prevent premature detonation. Critical mass is the minimum mass of fissionable material required to sustain a nuclear fission reaction. Think about the marble analogy again. If the circle of marbles are spread too far apart -- subcritical mass -- a smaller chain reaction will occur when the "neutron marble" hits the center. If the marbles are placed closer together in the circle -- critical mass -- there is a higher chance a big chain reaction will take place.

Keeping the fuel in separate subcritical masses leads to design challenges that must be solved for a fission bomb to function properly. The first challenge, of course, is bringing the subcritical masses together to form a supercritical mass, which will provide more than enough neutrons to sustain a fission reaction at the time of detonation. Bomb designers came up with two solutions, which we'll cover in the next section.

Next, free neutrons must be introduced into the supercritical mass to start the fission. Neutrons are introduced by making a neutron generator. This generator is a small pellet of polonium and beryllium, separated by foil within the fissionable fuel core. In this generator: