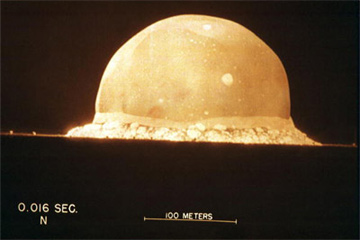 The detonation of a nuclear weapon unleashes tremendous destruction, but the ruins would contain microscopic evidence of where the bombs' materials came from. The detonation of a nuclear bomb over a target such as a populated city causes immense damage. The degree of damage depends upon the distance from the center of the bomb blast, which is called the hypocenter or ground zero. The closer you are to the hypocenter, the more severe the damage. The damage is caused by several things:

At the hypocenter, everything is immediately vaporized by the high temperature (up to 500 million degrees Fahrenheit or 300 million degrees Celsius). Outward from the hypocenter, most casualties are caused by burns from the heat, injuries from the flying debris of buildings collapsed by the shock wave and acute exposure to the high radiation. Beyond the immediate blast area, casualties are caused from the heat, the radiation and the fires spawned from the heat wave. In the long term, radioactive fallout occurs over a wider area because of prevailing winds. The radioactive fallout particles enter the water supply and are inhaled and ingested by people at a distance from the blast.

Scientists have studied survivors of the Hiroshima and Nagasaki bombings to understand the short-term and long-term effects of nuclear explosions on human health. Radiation and radioactive fallout affect those cells in the body that actively divide (hair, intestine, bone marrow, reproductive organs). Some of the resulting health conditions include:

These conditions often increase the risk of leukemia, cancer, infertility and birth defects.

Scientists and physicians are still studying the survivors of the bombs dropped on Japan and expect more results to appear over time.

In the 1980s, scientists assessed the possible effects of nuclear warfare (many nuclear bombs exploding in different parts of the world) and proposed the theory that a nuclear winter could occur. In the nuclear-winter scenario, the explosion of many bombs would raise great clouds of dust and radioactive material that would travel high into Earth's atmosphere. These clouds would block out sunlight. The reduced level of sunlight would lower the surface temperature of the planet and reduce photosynthesis by plants and bacteria. The reduction in photosynthesis would disrupt the food chain, causing mass extinction of life (including humans). This scenario is similar to the asteroid hypothesis that has been proposed to explain the extinction of the dinosaurs. Proponents of the nuclear-winter scenario pointed to the clouds of dust and debris that traveled far across the planet after the volcanic eruptions of Mount St. Helens in the United States and Mount Pinatubo in the Philippines.

Nuclear weapons have incredible, long-term destructive power that travels far beyond the original target. This is why the world's governments are trying to control the spread of nuclear-bomb-making technology and materials and reduce the arsenal of nuclear weapons deployed during the Cold War. It's also why nuclear tests conducted by North Korea and other countries draw such a strong response from the international community. The Hiroshima and Nagasaki bombings may be many decades past, but the horrible images of that fateful August morning burn as clear and bright as ever.