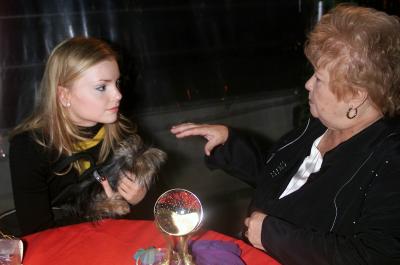 Psychics claim to have telepathic powers that allow them to predict the future.
Scott Gries/ Image Direct/Getty Images

Extra­sensory perception is a collective term for various hypothetical mental abilities. These abilities (along with other paranormal phenomena) are also referred to as psi.

The major types of ESP are:

A closely related psi phenomenon, not technically part of ESP, is telekinesis, the ability to alter the physical world with mind power alone.

­All of these abilities are based on the idea that human beings can perceive things beyond the scope of known bodily senses. This concept has been around since the beginning of human civilization, under many different names, but the modern conception didn't develop until the­ first half of the 20th century. The term ESP itself was coined in 1934, by Duke University professor J.B. Rhine, one of the first respected scientists to conduct paranormal research in a university laboratory.

ESP believers around the world have different ideas of how these abilities manifest themselves. Some people believe everybody possesses these abilities, and we involuntarily experience moments of ESP all the time. Others say only a handful of psychics, shamans or mediums have the special power, and that they can only access this power when they put themselves into a special mental state. Most believers think that everybody has the potential for ESP, but that some people are more in tune with their paranormal abilities than others.

Believers also disagree­ on how ESP actually works. One theory says that, like our ordinary senses, ESP is energy moving from one point to another point. Typically, proponents of this theory say ESP energy takes the form of electromagnetic waves -- just like light, radio and X-ray energy -- that we haven't been able to detect scientifically.

This theory was fairly popular in the early 20th century, but it's out of favor today due to several inherent problems. For one thing, the explanation only accounts for telepathy, not clairvoyance or precognition. Presumably, if the information travels as electromagnetic energy, it has to be sent by someone -- it has to travel from mind to mind. It doesn't explain how information would move through time or from an object to a mind.

Secondly, the theory doesn't jibe with what we know about ourselves and the universe. In most reported cases of telepathy, ESP works totally independent of distance. That is, the power of the "signal" is the same whether the transmitting mind and the receiving mind are in the same room or on opposite sides of the earth. No other form of energy behaves this way, skeptics point out, so it doesn't make sense that "psi waves" would either. Furthermore, it seems strange that we haven't found any unexplained sense organs in the body that might pick up on this energy, nor any evidence of the energy waves themselves.

In light of these problems, the prevailing theory among believers today is that ESP is a result of something beyond the known physical world. For example, many people view it as "spillover" from another reality. According to this theory, in addition to the physical universe we are consciously aware of, we all exist in another dimension that has completely different governing laws. Time and space work very differently in the other reality, allowing us to know about other people's thoughts, distant events or things that haven't happened yet in the physical reality. Normally, our awareness of this plane of existence is completely unconscious, but every once in a while, the conscious mind picks up on this information.

Needless to say, this theory is also completely outside our scientific understanding of the world. But, according to the theory's proponents, it's not supposed to fit into that conception. Like the concepts of God or an afterlife, the hypothetical reality would not rely on the physical laws of the universe. It would depend on the existence of a soul of some sort.

So, given that it's completely at odds with our understanding of the world, why do so many people believe in ESP? In the next section, we'll find out some of the reasons for this belief, and we'll see what scientific evidence supports it. ­