The Geopolitical Consequences of Oil Shale 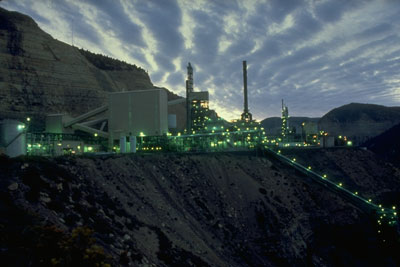 In the face of a major oil crisis in the 1970s, the Jimmy Carter administration federally funded oil shale research. But when the price of oil dropped once more, interest in unconventional supplies waned [source: Fortune]. With oil at prices higher than anytime in history — the wholesale price of oil per barrel is predicted to rise as high as $150 per barrel in 2008 — oil shale is attractive once again [source: NPR].

This holds true especially in the United States. The largest oil shale reserve in the world happens to be located in the western part of the country, covering parts of Wyoming, Utah and Colorado. This 17,000-square-mile deposit is called the Green River Formation [source: DOE]. And if crude oil can be produced from oil shale on a large scale, the U.S. could become the leader in unconventional oil reserves.

That's because the reserves found in the Green River Formation can produce an estimated 1.5 to 1.8 trillion barrels of crude oil [source: RAND]. This is three times more than the oil reserves Saudi Arabia currently holds. This amount could meet the United States' current oil demands for about 400 years [source: Argonne National Laboratory]. In actuality, this prolonged supply is due to a lesser pace of depletion than conventional reserves and the slower rate at which the kerogen could be extracted from shale. Some estimates place peak production of oil from the U.S.'s shale reserves at 5 million barrels per day at most. This isn't enough to meet the daily U.S. demand of 21 million barrels, just under 10 million of which are imported [source: Fortune].

But cutting foreign-imported oil by half would go a long way to making the U.S. less oil-dependent. In January 2008, the U.S. imported an average of about 3.8 million barrels per day from Venezuela, Nigeria and Saudi Arabia combined [source: EIA]. While U.S. relations with Saudi Arabia are friendly, the relationship between Venezuela and the United States is rife with tense political friction. And Nigeria is a politically unstable country; its oil supplies are under constant threat from rebel factions. These rebel groups resent foreign oil companies who, the groups claim, give little in compensation for the resources they take from the nation. Commercial oil shale production could protect the U.S. from threats to its energy supply posed by these countries.

Venezuela also demonstrates another aspect of commercial oil shale production in the United States: money, and lots of it. The oil shale deposits in the U.S. are largely situated under lands controlled by the federal government. Other countries, like Venezuela, have state-owned oil conglomerates; perhaps the U.S. will dabble in socialist energy policy in the future. The price is certainly right — Venezuela's state oil company posted revenues of $10.7 billion in the first three months of 2007. This represented a 10 percent decline in Venezuela's revenue over the same quarter of 2006 [source: AP]. Similarly, Vietnam's national PetroVietnam oil company reported earnings of $4.8 billion for the first quarter of 2008 [source: Viet Nam News].

These represent a drop in the bucket compared to the $2.5 trillion the U.S. government collected in taxes in 2007 [source: Tax Policy Center]. Still, every little billion helps.

For more information on alternative energy and other related topics, visit the links that follow.