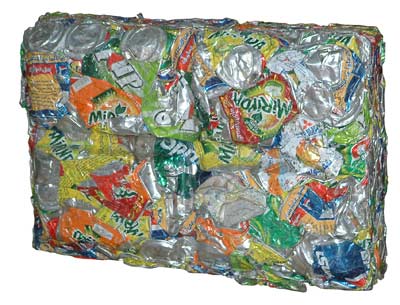 Although recycling may seem like a modern concept introduced with the environmental movement of the 1970s, it's actually been around for thousands of years. Prior to the industrial age, you couldn't make goods quickly and cheaply, so virtually everyone practiced recycling in some form. However, large-scale recycling programs were very rare -- households predominantly practiced recycling.

The mass production of the industrial age is, in many ways, the very reason we need to worry about large-scale recycling. When products can be produced (and purchased) very cheaply, it often makes more economic sense to simply throw away old items and purchase brand new ones. However, this culture of "disposable" goods created a number of environmental problems, which we'll discuss in detail in the next section.

In the 1930s and 40s, conservation and recycling became important in American society and in many other parts of the world. Economic depressions made recycling a necessity for many people to survive, as they couldn't afford new goods. In the 1940s, goods such as nylon, rubber and many metals were rationed and recycled to help support the war effort. However, the economic boom of the postwar years caused conservationism to fade from the American consciousness [source: Hall]. It wasn't until the environmental movement of the 1960s and 70s, heralded by the first Earth Day in 1970, that recycling once again became a mainstream idea. Though recycling suffered some lean years -- due to public acceptance and the market for recycled goods not growing -- it has generally increased from year to year [source: Hall] The success of recycling traces to wide public acceptance, the improved economics of recycling and laws requiring recycling collections or enforcing recycled content in certain manufacturing processes.