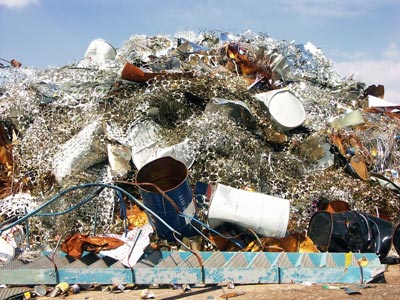 Most of the reasons we recycle are environmental, although some are economic. These include:

Landfills cause another problem in addition to taking up lots of space. The assortment of chemicals thrown into landfills, plus the chemicals that result when garbage breaks down and blends into a toxic soup known as leachate, creates huge amounts of pollution. Leachate can drain out of the landfill and contaminate groundwater supplies. Today, impermeable clay caps and plastic sheeting prevent much of this run off, making the landfills much safer than they were just a few decades ago. Still, any leachate is too much if it's draining into your neighborhood.

New Goods Use Up Resources

There's room for debate on this aspect of recycling, but many recycling processes require less energy than it would take to manufacture the same item brand-new. Manufacturing plastic is very inexpensive, and some plastic goods can be difficult to recycle efficiently. In those cases, the recycling process probably takes more energy. It can also be difficult to weigh all the energy costs along the entire chain of production. Recycling steel certainly uses less energy than the entire process of mining iron ore, refining it and forging new steel. Some contend that the fleet of recycling trucks collecting plastic and paper door to door every week in cities across the United States tips the balance of energy out of recycling's favor. Energy use is a factor weighed on a case-by-case basis.

Recycling has a variety of economic impacts. For the companies that buy used goods, recycle them and resell new products, recycling is the source of all their income. For cities in densely populated areas that have to pay by the ton for their landfill usage, recycling can shave millions of dollars off municipal budgets. The recycling industry can have an even broader impact. Economic analysis shows that recycling can generate three times as much revenue per ton as landfill disposal and almost six times as many jobs. In the St. Louis area, recycling generates an estimated 16,000 jobs and well more than $4 billion in annual revenue [source: Essential Guide].