The Future of Urban Planning 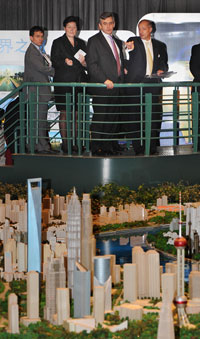 British and Chinese officials at the Urban Planning Museum in Shanghai, China, see a model of Shanghai in 2015.
Mark Ralston/AFP/Getty Images

As long as people live in cities, there will be a need for urban planning. In developing countries, such as China and India, high rates of urbanization make successful city planning especially difficult. Planners must balance the speed of decision-making with the need for thoughtful, well-considered programs for development. And they must address very difficult questions: What qualities in society should be valued most? What is fair and equitable? Whose interests will be served first?

In the future, these questions will likely be posed for cities that exist on the moon or Mars. Urban planning in such situations will have the added challenge of dealing with microgravity, extreme temperatures, radiation and other environmental issues. You might think that such a city is unrealistic, but NASA has been planning a "city in the sky" for years. In 1975, a team of researchers, planners and NASA officials met for 10 weeks to design this space city. The team's solution was a giant wheel nearly two kilometers across. Inside the wheel, the city's 10,000 inhabitants would enjoy breathable air and normal Earth gravity due to the rotation of the wheel about its axis. They would work in factories; travel across the city in transport tubes; and participate in activities at schools, arenas and theaters. They would, in short, do all of the same things residents of Earth-bound cities do. And they would require superior urban planning to make sure they lived in a healthy, comfortable and efficient community.

For more information on cities and related topics, visit the links below.

When most people think of urban planning, they think of improving existing cities. But sometimes planners start with a clean slate and design what are known as new cities, new towns or planned communities. Unlike suburbs, which serve as bedroom communities for residents who work in nearby cities, new towns encourage self-sufficiency by attracting businesses.

Columbia, Md., is one of the nation's first planned communities. Founded in 1962 on 14,100 acres of rural land, it has grown into a city of more than 97,000 residents. Columbia also features 2,500 businesses. Reston, Va., is another successful new town. Its 58,000 residents live and work on 11.5 square miles of land located just outside Washington D.C.

Companies sometimes build cities to house their employees. These company towns offer all of the amenities of a traditional city, including hospitals, hotels, recreation halls, schools and stores. Even the federal government builds cities in certain situations. For example, after the attack on Pearl Harbor, the U.S. government established three cities to support the war effort -- Oak Ridge, Tenn.; Los Alamos, N.M.; and Hanford, Wash. All three were chosen to be part of the "Manhattan Project," the top-secret initiative that would produce the world's first atomic weapons. Oak Ridge reached a peak World War II population of 75,000, making it the fifth largest city in Tennessee at the time.