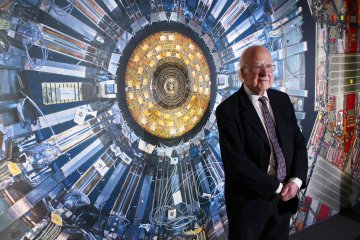 Professor Peter Higgs stands in front of a photograph of the Large Hadron Collider at the Science Museum's "Collider" exhibition on Nov. 12, 2013, in London, England.
Photo by Peter Macdiarmid/Getty Images

In July 2012, the announcement came that the Large Hadron Collider had found evidence for the Higgs boson. Scientists rejoiced. Researchers applauded. Physicists wept. Hardcore fans of the LHC wept, too, but everyone else mostly stood around the coffee maker at work and said, "So, we can travel through time now, right?"

From just a glimpse of the breathless media coverage and the images of physicists in Switzerland popping champagne, the layperson could easily figure out that finding the Higgs was a Big Deal. But what exactly that Big Deal had to do with our Little Lives was a little trickier to answer. Exactly what does it mean, from a practical sense?

First, let's establish a little background on the Large Hadron Collider (LHC) and the experiments in general, which were conducted at the European Organization for Nuclear Research. (We'll identify it by the acronym CERN, which honestly does make sense if you're going by the old name of the organization and speak French.) In a nutshell, the LHC accelerates protons to nearly the speed of light and then crashes them together. The collision creates not a Big Bang, but a Teeny Tiny Bang – an extremely small version of what it was like seconds after the universe began.

In those moments right after the protons smash together, they don't just bounce off each other. The energy from the resulting explosion allows us to see much heavier particles. They're extremely fleeting, and they decay into still other particles in microseconds. But it's those itty-bitty pieces of debris that can begin to answer great big physics questions. The Higgs boson is one such particle, and it brought scientists to their knees.

The Higgs boson does not "explain" physics, nor is it the key to understanding the universe. If physics were a gigantic jigsaw puzzle, finding the Higgs might help us establish that there is an image of a boat in the puzzle – but it still doesn't fit all the pieces together, or even let us know if the boat is the subject or how many pieces there are. Perhaps that seems a little anticlimactic for something occasionally referred to as "the God particle," which might explain why physicists hear the term and wince. The Higgs might just be the most important physics discovery of our generation, but it doesn't mean we figured out why we're here or what's in charge.

The most obvious answer to what the Higgs has done for us thus far is that it provides evidence that the Higgs field exists. And before you frown, complain bitterly about that copout answer, and invite us to join your tautology club, hear us out. Physicists had long struggled to explain why their equations only made sense if certain particles had no mass – when, in fact, the particles in question did have an observable mass.

Their theory was that the Higgs field existed: a soup of Higgs bosons that gave mass to elementary particles. It's not that the bosons were feeding the particles lots of starches and fats; it was that the field itself – which completely permeates the universe – made the particles move slower, allowing them to clump together and create matter. Think about a marble whipping fast around a tilted cake tin. Add a thick layer of flour to the pan, and suddenly the marble labors through the grains as it goes.

You might see why this solution was appealing. The pretty equations didn't have to change, because the particles could still be massless while also acknowledging that they did, in fact, gain mass in some way.

Here's where the theory and the experiment came together. By busting apart the protons in order to study a Big Bang-like event, scientists were able to find a particle that acted much like they predicted the Higgs should. In other words, for a period of time we could only generously call a split second, physicists could see a bit of the debris from the explosion following a certain path that indicated its behavior was different from the known particles. It had a mass and decay pattern that made it stand out in a lineup of Possible Higgs Suspects.

As we said earlier, finding the Higgs boson primarily meant that we now had evidence for the Higgs field. (After all, you need to have at least one grain of sand to prove that a beach exists.) And proving that the Higgs field exists was a huge step to explaining how the universe acquires mass.

While it's important to remember that the Higgs only gives mass to elementary particles like electrons and quarks, that doesn't mean that it's all the same to you and me [source: CERN]. The heart of the matter is this: Without the existence of the Higgs, the universe wouldn't be able to form atoms and molecules. Instead, electrons and quarks would simply flash by at the speed of light, like photons. They'd never be able to form any kind of composite matter. So the universe would be massless. We wouldn't exist, and neither would anything in any form we recognize.

But, remember what we said about only having an idea about the subject of our jigsaw puzzle? Completing the Standard Model might allow us to fit together more pieces of the puzzle, but it doesn't mean finishing the puzzle itself. That's because the Standard Model doesn't give us any description of gravity, nor does it answer any of our questions about dark matter and dark energy – and those account for a whopping 96 percent of our universe [source: Jha]. So simply saying that we've figured out the Higgs exists – which confirms the Standard Model – doesn't really give us much more than a whole bunch of new ideas about what exists beyond it.

Even worse, one of those ideas – supersymmetry – is quickly running out of steam, because of the Higgs discovery. Supersymmetry says that each fundamental particle has a superpartner that unites force and matter and might even be the basis of dark matter or energy. Unfortunately, the LHC is not finding those superpartners when the predictions indicate it should be able to detect them [source: Jha]. So one practical "use" of the Higgs is that it just might lead scientists to have to rethink theories that go beyond the Standard Model.

But don't feel like you're fortune's fool just yet. Remember that, back when electromagnetic waves were first discovered in the 19th century, we didn't know they'd eventually help us listen to the baseball game, nuke a frozen burrito or allow us to stare at our iPhones all day. While the discovery of the Higgs may not have any discernible applications just yet, they might just be one "Eureka!" away.

Author's Note: Has the LHC found any practical uses for the Higgs boson?

I would like to believe that discovering the Higgs really does more than just confirm the Standard Model. It would be cool if we found a way for the Higgs to, say, add mass to other things we think need some bulk. Like too-thin marinara sauces. Anything's possible!

What's the Difference Between Covalent and Ionic Bonds?
Is krokodil really a flesh-eating zombie drug?
Can't Read Roman Numerals? We Can Teach You