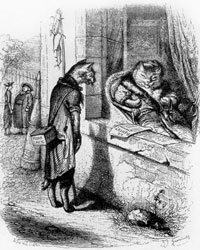 Did Newton bridge the worlds of indoor cat and outdoor cat?
Apic/Getty Images

When he wasn't envisioning space cannons and figuring out what holds the universe together, Isaac Newton applied his considerable intellect to other problems -- such as ways to keep the cat from scratching on the door.

Newton never married and cultivated few friendships, but he did make room in his life for cats and dogs. Sources vary on exactly how this relationship played out. Some contemporary historians label him an animal lover, while other accounts tell doubtful tales regarding a pet dog named Diamond. Some historians even doubt he owned pets at all.

The story goes that at the University of Cambridge Newton's experiments were interrupted constantly by his cats scratching at his office door, so he summoned the Cambridge carpenter and had him saw two holes in his door: a large hole for the mother cat and a small one for her kittens. Of course, since the kittens simply followed their mother through the larger hole, the smaller hole remained unused.

"Whether this account be true or false, indisputably true is that there are in the door to this day two plugged holes of proper dimensions for the respective egresses of cat and kitten," wrote a Newton contemporary some years after the scientist's death [source: Wright].

The jury is still out on this story. Newton could have invented one of the world's most popular cat accessories -- or somebody at Cambridge just liked to drill random holes.