Laying Down the Three Laws of Motion 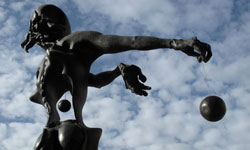 Designed by Salvador Dali, this bronze statue depicts a surreal Isaac Newton holding a sphere that represents the center of the universe.
Cristina Arias/Cover/Getty Images

While some historians doubt the tales of Newton's household pets, there's no denying his impact on our modern understanding of physics. Just as he nailed the fundamental workings of gravity in his law of universal gravitation, so too did he cut to the core of motion itself in his three laws of motion in 1687. Here's how they all break down:

It's easy to take these three laws for granted, yet scholars wrestled with the fundamental concepts of motion for centuries. The Greek philosopher Aristotle thought smoke moved upward because smoke was mostly air, and therefore was consciously deciding to go into the sky to hang out with the rest of its air buddies. French philosopher René Descartes devised laws of motion that were very similar to parts of Newton's first and third laws, but he still identified God as the prime mover.

Beautiful in their simplicity, Newton's three laws enable scientists to understand the movement of everything from subatomic particles to spiraling galaxies.