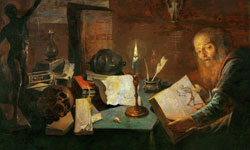 Newton's ravenous hunger for knowledge led him to numerous scientific discoveries, but they also led him on at least one winding goat ride to nowhere: the quest for alchemy's legendary philosopher's stone.

Descriptions of the stone vary from text to text, but it was essentially a man-made stone or elixir capable of bestowing universal transmutation. It could turn lead into gold, cure illnesses and even transform a headless cow into a swarm of bees.

Why did one of the greatest scientific icons involve himself with alchemy? To answer that question, you have to remember that the scientific revolution was just gaining steam in the 1600s. Alchemy hadn't quite been kicked to the curb as outdated quackery, and for all their occultism and mystical philosophy, alchemical texts also dabbled in very real chemistry.

Thirty years' worth of experimental notebooks, however, reveal that Newton's sights were set on far more than chemical reactions or even the promise of gold. According to historian William Newman, he sought "limitless power over nature" [source: NOVA].

This led Newton to texts on the philosopher's stone, which he attempted to decode in order to produce the mysterious substance itself. Ultimately a fruitless effort, Newton managed to produce a purple copper alloy. While not quite an invention, the stone illustrates much about the mind and times of this scientific icon.

In 2005, historian Newman reproduced this same stone by following Newton's 300-year-old notes. No transmutations were reported.