Calculus, I Am Your Father 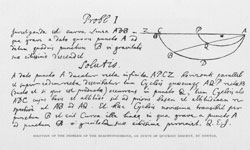 Whether your high school calculus class blew your mind or crushed your spirit, you can blame it all on Isaac Newton. See, mathematics is the system by which we gauge the interworking of the cosmos, but like many scientists of his age, Newton found that existing algebra and geometry simply weren't sufficient for his scientific needs. Let that sink in for a moment: Existing math wasn't advanced enough for Newton.

Mathematicians of the day could calculate the speed of a ship, but they couldn't figure out the rate at which the ship was accelerating. They could measure the angle of a sailing cannonball, but they had no way of calculating which angle would send the cannonball the farthest. What they needed was a mathematical means to calculate problems that involved changing variables.

This was the problem facing Newton when an outbreak of bubonic plague hit England in spring of 1665. As plague-stricken citizens dropped dead in the streets, Cambridge closed up shop, and Newton spent 18 months formulating the origins of what he called "the science of fluxions."

Today we know it as calculus, a critical tool for physicists, economists and probability scientists. In the 1960s, it even enabled Apollo engineers to chart a course from Earth to the moon.

Of course, Newton can't take all the credit. He typically shares the accomplishment with German mathematician Gottfried Leibniz, who independently developed calculus around the same time.