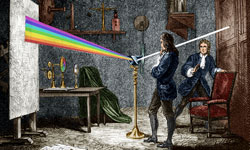 What's that, rainbows? You thought your secrets were safe from Isaac Newton? Guess again, because in 1704, he literally wrote the book on the refraction of light. Jazzily titled "Opticks," the work changed the way we think about light and color.

Scientists of the day knew that rainbows formed when light was refracted and reflected in raindrops, but they didn't know why rainbows were so colorful. When Newton first began his studies at Cambridge, the common theory was that the water somehow dyed the sun's rays different colors.

Using a lamp and a prism, Newton experimented by running white light through a prism to separate it into a rainbow of colors. The prism trick was nothing new, but scientists assumed the prism colored the light. By reflecting the scattered beams into another prism, however, Newton reformed them back into white light, proving that the colors were a characteristic of the light itself.

So eat it, rainbows. Newton saw right through you, and he used the knowledge to create the next invention on our list.