Through the Reflecting Telescope 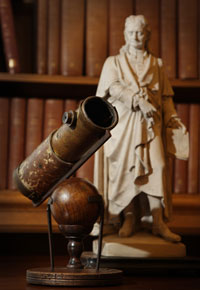 Newton's telescope rests next to a statue of the great man at the Royal Society in London.
Peter Macdiarmid/Getty Images

Newton was born into an age of lackluster telescopes. Even the better models used a set of glass lenses to magnify an image. Through his experiments with colors, Newton knew the lenses refracted different colors at different angles, creating a fuzzy image for the viewer.

As an improvement, Newton proposed the use of reflecting mirrors rather than refracting lenses. A large mirror would capture the image, then a smaller mirror would bounce it into the viewer's eye. Not only does this method produce a clearer image, it also allows for a much smaller telescope.

Granted, a Scottish mathematician proposed the idea of a reflecting telescope first, but Newton was the guy who actually mustered the energy to build one. Grinding the mirrors himself, Newton assembled a prototype and presented it to the Royal Society in 1670. Merely 6 inches (15 centimeters) long, the device eliminated color refraction and boasted 40x magnification.

To this day, nearly all astronomical observatories use a variant of Newton's original design.