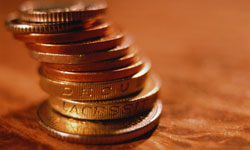 At this point, you probably have a good sense of Newton's obsessive nature. So it should come as no surprise to learn that, when appointed the largely ceremonial role of Warden at the Royal Mint in 1696, the famed inventor took to the mean streets of London -- in disguise -- to root out counterfeiters.

And since counterfeiting was then a capital offense in Britain, the miscreants he brought to justice typically wound up at the execution block.

See, by the late 1600s, England's financial system was in full-blown crisis mode. The country's currency consisted entirely of silver coins, and that silver was often worth more than the value stamped on it. So what did people do? Why, they melted down the coins or "clipped" silver from the edges to sell to France.

By Newton's time, clipping had done a number on the nation's currency. The average bag of English coins was just a hodgepodge of damaged and unrecognizable silver chunks. As such, forgers had a field day. Since English coins varied so widely in size and quality, it was easy to pass off even the most sloppy knockoffs as legal tender. Riots broke out as faith in the English currency plummeted.

So in 1696, the British government called on Newton. In addition to hands-on crime fighting, he recalled all English coins and had them melted down and remade into a higher-quality, harder-to-counterfeit design. It was a bold move, considering that the entire country had to make do without a currency for an entire year. Working as many as 18 hours a day, Newton reorganized the Royal Mints into high-quality, high-efficiency factories pumping out currency that was highly resistant to forgers.

You know those ridges on the edge of a U.S. quarter? Those are milled edges, a feature introduced by Newton on English coins to prevent clipping.