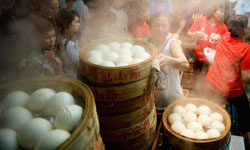 Newton never experienced the wonders of Chinese steamed buns, but he did outline the math behind what's happening here.
Victor Fraile/Getty Images

As you've probably gathered, Isaac Newton's idea of stone-cold chilling involved tackling a scientific or even occultist problem with the full power of his considerable intellect. Where existing instruments, methods and laws failed him, he invented new ones. You could say he was the Chuck Norris of scientists.

If you've ever returned to a half-finished cup of coffee and found it cold, then you've experienced cooling. Newton, however, was interested in the physics of that cooling cup. So in the late 1700s, he conducted experiments involving red-hot iron balls. He noted that when the difference in temperature between the ball and the surrounding air was less than 50 degrees Fahrenheit, the rate of heat loss was proportional to the temperature difference.

Thus, Newton's law of cooling states that the rate of heat loss of a body is proportional to the difference in temperatures between the body and its surroundings. French chemist Pierre Dulong and physicist Alexis Petit later tweaked the law in 1817, but the groundwork of Newton's work on cooling underlies everything from nuclear reactor safety to space exploration.