The Shape of Everything 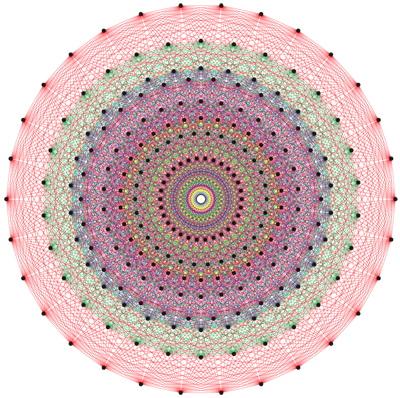 The E8 Lie group, a perfectly symmetrical 248-dimensional object and possibly the structure that underlies everything in our universe.
Courtesy John Stembridge/Atlas of Lie Groups Project

Mathematics is the language of the universe. Absolutely everything, from a plane crash to your skin pigment to the shape of a sphere can all be expressed using mathematical equations. This last example is most important to Lisi's pursuit of the theory of everything. It is using a description of a symmetrical geometric object that Lisi may have uncovered the relationship between the standard model of particle physics and relativity.

In the 19th century, the mathematician Sophus Lie created algebraic formulas to describe the shape of symmetrical objects. These are called Lie fields. His work was built upon by succeeding mathematicians, and in the 1890s, Wilhelm Killing found a set of Lie fields that described perhaps the most complex shape in our universe, the E8 group. The E8 group, an interrelated 248-dimensional symmetrical object, is an extremely complex one.

This dense object is so complex, in fact, that it was plotted by computer for the first time in 2007. It took a team of 18 mathematicians -- the Atlas of Lie Groups project at the American Institute of Mathematics -- four years to calculate and plot the formula for E8. The group spent two years on the calculations, and two more dedicated to figuring out how to calculate the shape on the computers available today.

Ultimately, the Atlas project broke the E8 calculations into sections and assigned them to different computers. They took the incomplete answers from each section and pieced them together into the Sage supercomputer, which took 77 hours to complete the task. This is no comment on Sage's ability: Were the E8 formula and resulting answer written in small print on paper, the paper would cover a 7 square-mile area.

While the Atlas project was the first to actually plot E8, mathematicians have known about the existence of the symmetrical shape for years. So, too, have physicists. Some have even approached the E8 as a possible theory of everything, but none have come as close as Lisi.

So how can a symmetrical shape be the key to the universe? First remember that a geometrical shape is merely the graphic representation of mathematical formulae. This holds true for a rhombus you construct in high school math class or a racquetball. It is a pattern that is expressed in math and forms a shape when plotted. In this sense, the E8 could be the framework into which everything -- all forces and particles -- fits in our universe.