On Feb. 14, 2008, President George W. Bush announced the United States would shoot down its own USA 193 spy satellite. The U.S. lost contact with the satellite only a few hours after its launch in December 2006 by the National Office of Reconnaissance (NRO). A year later, USA 193 entered into a decaying orbit -- moving toward Earth -- and would re-enter the Earth's sometime in March 2008, out of any kind of human control. A missile fired from the U.S.S. Lake Erie hit the satellite at 10:26 p.m. on Feb. 20, successfully destroying the errant bird [source: Gray].

Government officials say that if the gas canister containing 1,000 pounds (453.6 kg) of unspent hydrazine fuel survived the missile strike, made it back to Earth and leaks, it could have posed a health risk. The gas is like chlorine, and causes the same type of lung and throat irritation effects as chlorine -- prolonged exposure can mean death. A similar gas canister withstood re-entry following the Columbia space shuttle disaster in 2003. While it didn't land in an area where it endangered lives, it could have. "This is all about trying to reduce the danger to human beings," said Deputy National Security Adviser, James Jeffrey [source: The New York Times]. Pentagon officials are confident the fuel tank was destroyed along with the rest of the satellite [source: CNN].

Not everyone buys the United States' reason for firing on the satellite. Once plans were announced, both Russia and China cried foul, calling the plan a threat to space security and thinly disguised tests of the United States' missile defense systems. The two nations saw the mission as an opportune way for America to show "its capability to destroy other countries' satellites" [source: AP].

Other organizations viewed the missile strike with a critical eye. "There has to be another reason behind this," Michale Krepon, of the Henry L. Stinson Center on arms control, told The Washington Post. "In the history of the space age, there has not been a single human being who has been harmed by objects falling from space."

In other words, some speculate the world is watching a chess game play out above the Earth's atmosphere. In January 2007, China shot down an old weather satellite 537 miles (864 km) into space. Back then, the roles were reversed -- the United States filed a formal complaint with the United Nations about China's reckless behavior.

Regardless of the motives behind what has come to be called in defense circles, "the shot," was an apparent success. So how exactly did the United States pull it off? Read about that on the next page. 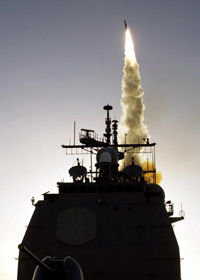