What Does a Sniper Really Do? 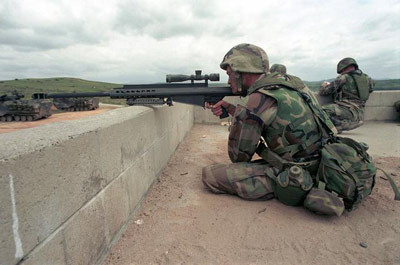 A sniper is a highly trained soldier who specializes in shooting targets with modified rifles from incredibly long distances. They're also adept in stealth, camouflage, infiltration, and observation techniques.

Military snipers are used in a variety of missions on the battlefield, and the sniper's primary mission has nothing to do with pulling a trigger. The main battlefield role of the sniper is reconnaissance. Because snipers are masters of stealth, they are perfectly suited to sneak behind enemy lines to provide command with information about the enemy's size, strength and location.

When the mission calls for it, snipers can also dismantle and dishearten the enemy with a few well-placed rifle shots. Instead of engaging the entire enemy force like traditional infantry, snipers concentrate their efforts on hunting key people -- officers, pilots, armor drivers, technicians, and communications operators. With deadly shots that kill without warning, military snipers break both the enemy's will and ability to fight.

When there is no specific objective, a sniper will look for targets of opportunity. By tracking enemy movements, snipers wait patiently for the unsuspecting soldiers to present the opportunity for a perfect shot. An officer taking a break to smoke a cigarette, a pilot flight-checking his helicopter, an armed guard on patrol -- these are all targets of opportunity.

"You want to take out what's going to help your buddies the most." This is what Army Ranger Sniper had to say on selecting targets of opportunity. He continues:

... When you're in the military, you have experience knowing how a commander acts. You know a private -- a private Joe Nobody is generally going to be sitting behind a mound or sitting in a hole with his weapon. You can tell who's who by looking -- 'Okay, this guy's in charge and that guy's a nobody' -- just because of the way they act. That's one of the reasons in the field you're not supposed to salute officers. Say, in the field, you're sitting there looking and some guy walks by and salutes somebody and then, 'BAM' -- you know he's an officer. That's one of those things you pick up on.

Snipers are also utilized in support roles. These support roles can be an over-watch position or a blocking action. When a sniper is in an over-watch position, he sets himself up in a concealed place that gives him a clear view of the battlefield. There he can support the assault force by taking out enemy forces that are endangering the advancing platoon. In a blocking action, snipers set up to help secure a position that is controlled by their platoon. They may set up on a roof and help ground forces defend their position.

­Snipers don't just shoot people. They are often ord­ered to destroy material targets. A sniper may shoot generators, radios, transmitters, or fuel and water supplies. Putting a .50 caliber round in the engine block of a helicopter or transport is just as effective as putting one in the man who drives them.

Snipers are what military strategists refer to as force multipliers. Simply put, a force multiplier is an individual or small team that, through the use of special tactics, can do the damage of a much larger force. What's amazing about snipers is that they are capable of force multiplication without ever directly engaging the enemy.

Because of the nature of their missions, snipers travel with very little gear, patiently moving under the cover of brush or night. But they never travel alone. Snipers teams often have to stay completely still for hours or days at a time to avoid detection, waiting for the right moment to take the shot. In the next section, we'll learn how sniper teams work together to achieve "the perfect shot."

In the interest of privacy, the Army Ranger sniper we interviewed for this article asked not to be named; he will be referred to as Army Ranger Sniper for the duration of this interview.