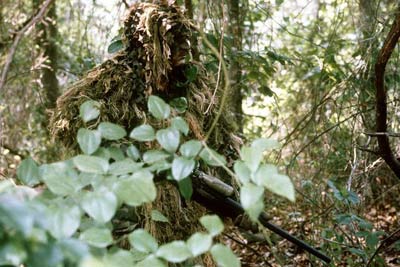 If you've ever seen a sniper on the news or in a film, then you have probably noticed that unsettling, half-man, half-shrubbery appearance. That is thanks to a ghillie suit. The point of the ghillie suit is to make a sniper disappear into his surroundings.

The word ghillie is an old Scottish term for a special kind of game warden. Ghillies were tasked with protecting the game on their Lord's lands. From time to time, the ghillies would stalk the game by hiding in the grass and lying perfectly still. They would wait for unsuspecting deer to amble by and then leap out and grab it with their bare hands. Ghillies would then haul their prize back to the keep so the Lord could shoot it in the castle courtyard in a "mock hunt."

Ghillie suits are basically old military uniforms that snipers modify for their special purpose. The belly of the uniform is reinforced with heavy canvas to help pad a sniper's torso during hours or days of lying on his stomach. Camouflage netting is attached to the uniform. This netting is used to attach shredded burlap and other frayed materials. Ghillie suits are usually painted to match the environment of the battlefield. Local elements like twigs, vines, and branches can be incorporated into the netting to further camouflage the ghillie suit.

Nothing in nature has perfectly straight lines, so equipment like rifles and antennas often betray concealed positions. To counter this, snipers also make little ghillie suits for their rifles. Using the same principles of camouflage, snipers wrap their rifles in canvas and create little sleeves that make them blend into the environment.

Soldiers are trained to keep their eyes peeled for strange things in their surroundings that could represent a threat. The human form is one of the most recognizable shapes in nature. Snipers, spotters, and trained observers all look for color and contour when trying to spot an enemy in the brush or other terrain. Ghillie suits help the sniper to break up his outline, hide straight lines in his gear and blend his overall color with the surroundings. "With a good ghillie suit," Army Ranger Sniper explains, "you could hide in a yard and people wouldn't be able to see you."