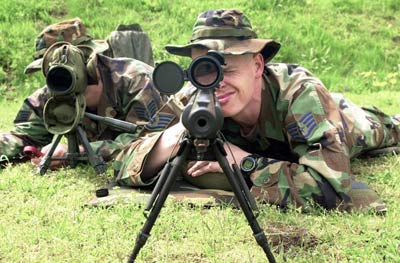 The skill snipers are most known for is their marksmanship. The ability to hit targets as far as a 1,000 yards away (10 football fields!) is not something that comes naturally. Snipers train to become expert marksman with a deeply ingrained understanding of the principles of ballistics.

MOA (minute of angle) is the unit of measurement that snipers use in school to measure accuracy. The greater the distance the sniper is shooting from, the lower the accuracy, as natural forces like wind resistance work on the bullet while it travels through the air. MOA measures the accuracy of the shot taking the distance it was fired from into consideration. The basic formula is 1.047 inches at 100 yards, or, for practical purposes, 1 inch at 100 yards. For every 100 yards the bullet travels, you add 1 inch of inaccuracy.

The two biggest variables that affect a bullet's flight are wind and gravity. When estimating the range of a target, snipers must consider how the wind will affect flight over that distance. Sniper teams can use indicators like smoke or blowing leaves to help them read the wind.

Despite the high power of a rifle shot, it is still affected by gravity. If you were to fire a sniper rifle level to the ground at the same moment that you drop a bullet from the barrel height, the fired bullet and the dropped bullet would hit the ground at the same time. As a round travels through the air, gravity is dragging it down. When sighting a shot, snipers must often compensate for this by "overshooting" the target.

Air temperature affects a bullet, as well. Cold air is denser than hot air and therefore creates more drag on a bullet. On the other hand, bullets can tear through hot air. But Army Ranger Sniper explains that because humidity often accompanies hot air, which will also affect the bullet, this is yet another variable to be considered. "And with winds and heat and humidity -- if you look at all the factors it's amazing you can hit anything."

Even in ideal shooting situations, targets may be at odd angles or moving. Snipers are taught at the range how to deal with these problems.

Ultimately, the farther a sniper can be from his target and still remain accurate the more effective he is and the less likely he is to be discovered. Using a 7.62mm round, snipers can shoot nearly silently as long as they're shooting from over 600 meters. A bullet leaves the rifle barrel faster than the speed of sound. The cracking sound a bullet makes is a tiny sonic boom. Even if a target doesn't hear the rifle shot, he will hear the bullet fly by. But the drag created by wind resistance on a 7.62mm round as it travels through the air slows the bullet down to sub-sonic speeds at around 600 meters. So at ranges over 600 meters, the bullet no longer makes that distinct cracking sound. Army Ranger Sniper tells us, "If you're shooting at a target 800 or 1,000 meters out, you could be shooting at that person all day long and they don't even know they are being shot at."

Snipers spend plenty of time in school cracking the books and in the classroom learning the principles of ballistics, windage, air density, and many other variables that affect the flight of a bullet. But at the end of the day, it comes down to what snipers call "rounds down range." A sniper's most valuable classroom is the firing range. Snipers don't have time in the field to think about theory. Hours at the range help snipers to apply these principles by "feel."

There is a plaque on the wall of the Marine Sniper school at Camp Pendleton that has a translation of a Chinese proverb that reads, "Kill one man, terrorize a thousand."