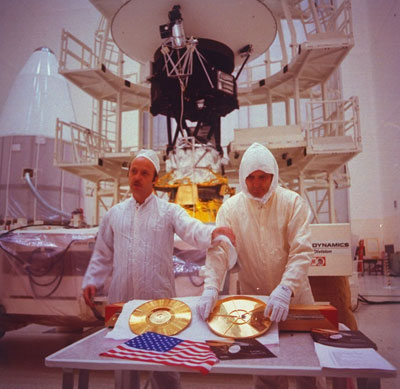 When NASA realized that the Voyagers would eventually travel beyond the edge of our solar system, they decided it might be a good idea to include some kind of message to any intelligent aliens who might some day find them. A committee headed by astronomer Carl Sagan put these messages together. They're contained on gold-plated copper discs, which are engraved much like a vinyl record album. A portion of the disc contains audio information, including a variety of music, greetings spoken in 55 different languages (including some that are very obscure or long extinct) and a selection of nature sounds. The discs also include 122 images, encoded as vibrations on the disc with instructions for decoding.

On each disc’s cover plate are several symbols that depict the method of playing back the record (a stylus and mounting platter are included as well). The image decoding instructions are revealed, describing the “image start” signal, the aspect ratio of the images, and a reproduction of the first image, so the aliens would know if they got it right. A star map clearly showing the location of Earth completes the picture.

If the aliens wonder how long the Voyager they find has been traveling, they can examine the piece of uranium-238 attached to the main bus near the record. Examining the isotope ratios (assuming they know the half-life of uranium-238), they could then deduce how long the sample had been in space.

What music will the aliens hear when they play the record? Mostly traditional music from a variety of cultures, such as Native Americans chants, Scottish bagpipes and African ritual music. It is also something of a “greatest hits” collection of classical music. The most contemporary songs are “Johnny B. Goode” by Chuck Berry and a jazz number by Louis Armstrong.

The images on the record are varied, and include maps of Earth, images of the other planets in our solar system, pictures of various animals and several images of humans. Carl Sagan wrote a book about the record, called "Murmurs of Earth." A companion CD-ROM was released decades later.

The Voyager discs are similar to a plaque that was placed aboard Pioneer 10 and Pioneer 11, although the creators of the Voyager discs spent a lot of time making sure the aliens could decode it. Many Earth scientists could not decode the information on the Pioneer plaque. At the time, some voiced concerns that any hostile aliens finding the Voyager disc would have a map leading them directly to Earth. However, the Voyagers will spend tens of thousands of years in interstellar space before they are anywhere near another star, so the matter isn’t really an immediate concern. If the discs are ever found, it may be so far in the future that humans no longer exist.

For more interesting articles about space exploration, try the next page.

In "Star Trek: The Motion Picture" (the first Star Trek film), much of the plot revolved around a strange electronic life form known as V’Ger. By the end of the film, it is revealed that V’Ger is one of the Voyager space probes (Voyager 6, which never existed in the real world) that has either gained sentience on its own or been given sentience by an alien race. It wants to eradicate all of humanity, but instead evolves into yet another form of life.

Within the fictional Star Trek universe, there is some dispute as to V’Ger’s place in Trek history. Some suggest that V’Ger created the Borg, a cold, logical alien race that would become the primary villains in "Star Trek: The Next Generation." Others think the Borg encountered V’Ger, but that the cyborg aliens existed before the chance meeting.