The Role of Dark Energy 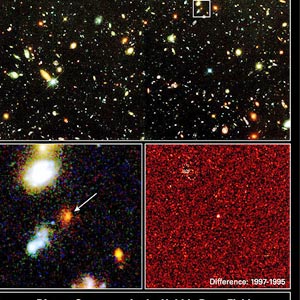 Pictured and magnified here on the left is a supernova that Hubble caught on camera that exploded 10 billion years ago. Called 1997ff, it greatly bolstered the case for the existence of dark energy pervading the cosmos.
Photo courtesy ­NASA-GSFC

­Just as astronomers were grappling with the impact of dark matter, they made a discovery that caused them to go back to the chalkboard once again. The discovery came in 1998, when the world's best telescopes revealed that type Ia supernovae -- dying stars that all have the same intrinsic brightness -- were farther away from our galaxy than they should have been. To explain this observation, astronomers suggested that the expansion of the universe is actually accelerating or speeding up. But what would cause the expansion to go faster? Isn't the gravity inherent in dark matter strong enough to prevent such an expansion?

As it turns out, there's more to the cosmic story than previously thought. Some cosmologists now think that something else -- something just as inexplicable and unobservable as dark matter -- is lurking in the universe. They sometimes refer to this invisible stuff as dark energy. Unlike gravity, which pulls on the universe and slows its expansion, dark energy pushes on the universe and works to speed up the expansion. And there's a lot of it. Astronomers estimate that the universe might be 73 percent dark energy. Dark matter, they think, makes up another 23 percent, and ordinary matter -- the stuff we can see -- makes up a paltry 4 percent [source: Brecher]. With numbers like that and given that dark energy is an inflationary force, it's easy to see how the big crunch might never happen at all.

Interestingly, Albert Einstein predicted the existence of dark energy back in 1917 as he tried to balance the equations of his general theory of relativity. He didn't call it dark energy at the time. He referred to it as the cosmological constant and labeled it lambda in his calculations. Although he couldn't prove it, Einstein thought there must be a repulsive force in the universe to spread everything around so evenly. Eventually, he recanted, calling lambda his greatest blunder.

­Now, scientists are wondering if Einstein may have been right once again -- unless, of course, he's wrong. Up next, we'll explore why some still hold the big crunch in high regard and why it might not be the end of the universe, but a second beginning.