Oil Rigs: Cities on the Sea 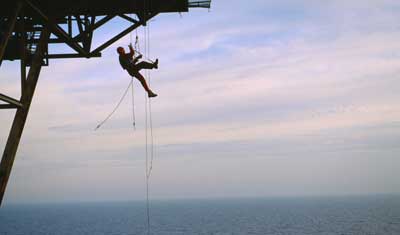 Offshore production platforms may be marvels of modern engineering, but none of that valuable petroleum makes its way out of the wells and into refineries without a great deal of human labor. In fact, larger oil rigs often employ more than a hundred workers to keep the platform running. As many of these rigs are located far from cities and shores, the employees (who range from engineers and geologists to divers and doctors) live for weeks at a time on these huge structures.

There are definitely pros and cons to working on an offshore platform. On the plus side, salary and benefits are usually pretty good, and employees typically enjoy long rest periods when they're not at sea. Employees will work one or two weeks on the oil rig, then spend one or two weeks at home. The downside, however, is that when they're at sea, they work 12-hour days, seven days a week. The weeks away from home can strain workers' home lives, as they spend half the year away from their family.

To help cope with these issues, petroleum companies frequently put a great deal of effort into providing comfortable living conditions for offshore workers. In many cases, quarters are on par with those found on major cruise ships -- featuring private rooms, satellite TV and even gym, sauna and recreation facilities. The food onboard also tends to be above average -- and available 24 hours a day. After all, work on an oil rig continues day and night, with employees working rotating schedules of daytime and nighttime shifts. Helicopters and ships bring in most of the necessary materials for day-to-day life on an oil rig, often through choppy weather conditions.

Oil rigs aren't all Jacuzzis and cafeterias, though. Outside the living quarters, life on an oil rig is a constant encounter with potentially deadly conditions. The business of an oil rig boils down to drawing extremely flammable fluids out of the Earth, burning some of it off in a giant jet of flame and separating highly poisonous hydrogen sulfide gas from the extracted petroleum. On top of this, workers have to deal with all the typical dangers associated with operating dangerous machinery and working at tall heights in windy, stormy conditions.

To cope with these d­angers, petroleum companies make use of extensive training programs on how to work safely with volatile substances on the high seas. These measures not only help to safeguard the lives of their employees, but also protect their truly massive financial investment in constructing and sustaining an offshore production platform.

­Explore the links below to learn more about oil and the business of petroleum.