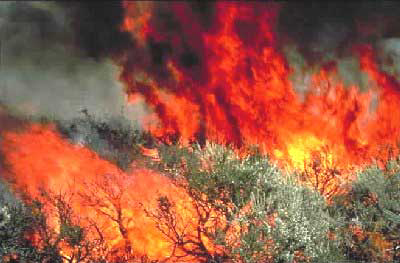 Landscape foliage isn't the only culprit to be found around your home. You should also consider what your house is made of and any combustible items you store nearby. If you live in an area that has a history of wildfire activity, your home may already be outfitted with fire-retardant materials. For example, a slate or metal roof is much better than regular shingles. Check any outside storage closets or buildings for flammable items like paint, kerosene, gasoline or propane and move them 10 to 15 feet away from your home or any other structures. This includes that gas grill near your deck.

Temperature has a direct effect on the sparking of wildfires, because heat is one of the three pillars of the fire triangle. Sticks, trees and underbrush on the ground receive radiant heat from the sun, which heats and dries potential fuels. Warmer temperatures allow for fuels to ignite and burn faster, adding to the rate at which a wildfire spreads. For this reason, wildfires tend to rage in the afternoon, when temperatures are at their hottest.

Wind probably has the biggest impact on a wildfire's behavior. It is also the most unpredictable factor. Winds supply the fire with additional oxygen, provide even more dry potential fuel and push the fire across the land at a faster rate.

The stronger the wind blows, the faster the fire spreads. The fire generates winds of its own that are as much as 10 times faster than the ambient wind. It can even throw embers into the air and create additional fires, called spotting. Wind can also change the direction of the fire, and gusts can raise the fire into the trees, creating a crown fire. Obviously, you can't do anything to change the weather, but you can be aware of it. If a wildfire is in your area, you will want to watch the weather and note any changes in wind direction or speed or humidity. When the humidity is low, meaning that there is a low amount of water vapor in the air, wildfires are more likely to start. The higher the humidity, the less likely the fuel is to dry and ignite.