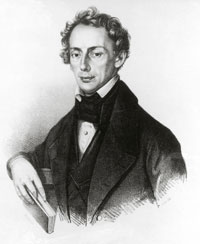 In 1992, Austria marked the 150th anniversary of the discovery of the Doppler effect by releasing a stamp featuring the thin face of Christian Johann Doppler. Although Doppler never could have imagined such a tribute, he did grasp the significance of his work from the very beginning. In the 1842 paper that first described the phenomenon, Doppler offered this prediction: "It is almost to be accepted with certainty that [the Doppler effect] will in the not too distant future offer astronomers a welcome means to determine the movements and distances of such stars which, because of their unmeasurable distances from us and the consequent smallness of the parallactic angles, until this moment hardly presented the hope of such measurements and determinations."

The "not too distant future" ended up being almost 100 years, which is how long it took for the Doppler effect to have a major impact on cosmology, meteorology and medicine. But it certainly made an impact and made Doppler one of the most recognized names in the history of science.

Say "relativity" and you'll immediately form a mental image of Albert Einstein: white and wild hair, bushy mustache and thoughtful eyes. Few people, however, can picture the man behind the Doppler effect. To help remedy this, let's review some of Doppler's vital statistics:

Doppler first described the discovery that would bear his name in a paper, published in 1842, titled "Über das farbige Licht der Doppelsterne" ("Concerning the colored light of the double stars and certain other stars of the heavens"). Six years later, a French physicist by the name of Armand-Hippolyte-Louis Fizeau, unaware of Doppler's work, would publish a similar paper describing the exact same phenomenon as it applied to the red- and blue-shifting of stars. In fact, some scientists describe the shifting of light as the Doppler-Fizeau effect.­