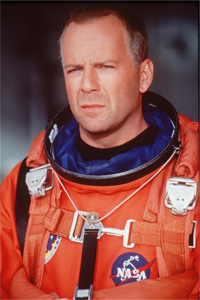 Bruce, you may be a diehard, but even you can't save us from this Armageddon scenario.
Getty Images

Doomed -- there's no other word for it. The scientists have crunched the numbers, and we're in the black hole's path. Even Bruce Willis and a plucky crew of nuke-toting oilers can't save us now.

The tug of the black hole's gravity on Neptune provides our first solid clue that something dire is afoot. Astronomers know Neptune's orbit so well that they can detect a deviation in it as small as 1 arc second (a unit of angular measure). A typical 10-solar-mass black hole moving at a characteristic speed of 300 kilometers per second (671,081 mph, or about one-thousandth the speed of light) would cause that much ruckus while still one-tenth of a light-year out [source: Hamilton].

Here's our last bit of good news: A black hole of such a size moving at such a clip would give us around 100 years of warning in which to get our act together. A slower moving black hole might give us 10 times that long. Either way, it's time to start building that space ark, folks [source: Hamilton].

As it passes close by Neptune, the dark destroyer pulls the gas giant into its orbit. The planet looks strange now: As it moves away from us, its colors appear redshifted -- the wavelengths of its radiation, including light, stretch out, shifting toward the red end of the spectrum. As Neptune passes behind the black hole, gravitational lensing makes it appear to flatten and warp around the murky sphere. As the planet emerges again, heading toward us, its colors look blueshifted -- its emission wavelengths bunch up, shifting toward the blue end of the spectrum.

Redshifting and blueshifting usually result from a stellar object moving away from us or toward us, respectively, much like the Doppler shift of a siren as an ambulance passes us; around a black hole, they're also a consequence of the way extreme gravity warps time.

Soon, the black hole tears the gas giant apart, stripping its component gases off in a swirling gravity spiral, the accretion disk, like spun sugar in a cotton candy machine. From our perspective, it seems to take forever to spiral into the event horizon. Meanwhile, the light released by Neptune's death throes outlines the black hole in negative, like the sun's corona during a solar eclipse.

As the black hole closes on Earth, we can finally see its surrounding starfield bend and stretch from lensing, like something in a funhouse mirror. Every available telescope turns to watch this distortion and the black emptiness at its center.

If our dark destroyer is a supermassive black hole, the story is already over; its event horizon looms as much as five times as large as our solar system [source: Marder]. But what fun is that? Let's see what one of these monsters looks like on the inside.