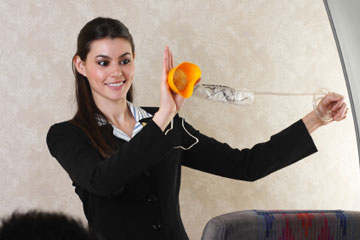 You know the drill.
© iStockphoto.com/ gchutka

Sure, humans evolved to thrive in Earth's atmosphere, but it's important to realize that we only evolved to thrive in a thin layer of the planet's gaseous outer layer. Air pressure changes depending on altitude. In the same way that the water pressure in the ocean is greater on the seafloor than it is just below the surface, air pressure decreases the higher you ascend through the atmosphere.

When humans breathe thinner, high-altitude air, they have a harder time taking in enough oxygen. And when we hang out at heights higher than 9,800 feet (3,000 meters), our bodies become susceptible to a host of unpleasant or even deadly illnesses, like these:

Altitude sickness: Also the bane of high-altitude mountain climbers, reduced air pressure and lower oxygen concentration levels can cause extreme shortness of breath due to fluid buildup in the lungs. In extreme cases, this can lead to brain swelling, resulting in confusion, coma or death.

Ear barotrauma: The Eustachian tube connects your middle ear to the outside world. If this tube becomes blocked, changes in atmospheric pressure can cause a pressure differential that can result in dizziness, discomfort, hearing loss, ear pain and nose bleeds.

Decompression sickness: Divers know this condition as the bends, and it can occur in the air, as well as in the water. Exposure to low barometric pressures can cause dissolved nitrogen in the blood stream to form harmful bubbles that can cause everything from drowsiness to stroke.

Hypoxia: As low pressure means less oxygen in every breath you breathe, the brain receives less oxygen at high altitudes. The physiological results often include cognitive impairment or light-headedness, which can seriously impair a pilot's ability to fly the plane.

Pressurized cabins enable pilots, crew and passengers to avoid these pitfalls of flying at high altitude. While the air outside the cabin thins out the higher a plane climbs,  compressed air inside the cabin maintains more surface-level air pressure and oxygen-rich air. In the event of accidental loss of cabin pressure, emergency oxygen masks provide the necessary air quality.

Pressurized flight suits achieve the same effect as pressurized cabins, only on an individual basis. Characterized by enclosed helmets, these suits typically see use in military and high-performance aircraft.