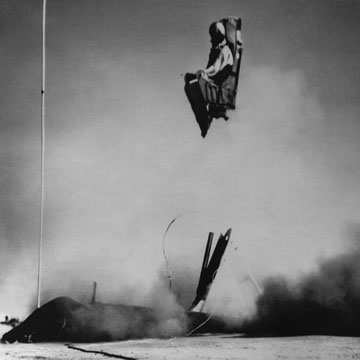 Modern aircraft enable passengers to wine, dine and even catch a good night's sleep without any worries over the plane's soaring altitude or the mechanical means that keep them there. When something goes wrong, however, you need to be able to exit the plane and live to tell the story on the ground.

As such, planes have boasted several ingenious escape features over the years. Let's walk through some of the ways you might try to exit an aircraft in an emergency.

The evacuation slide: No one wants to abandon an airplane before landing, so if it's possible, pilots attempt to regain control or at least achieve a crash landing. At this point, you generally want to flee as far from the damaged airplane as possible. This is where the evacuation slide comes in handy. Compressed gas inflates the slide, allowing for speedy deployment. A passenger then slides down and, in some cases, the inflatable slide can be used as a flotation device.

The parachute: The first parachute jump from an airplane took place in 1912, a mere nine years after the Wright brothers' inaugural flight. It has remained an aviation staple, creating drag to slow down a moving object, person or aircraft. You won't find a cache of emergency chutes on a commercial airliner, however, as they typically operate at speeds and altitudes that would require additional safety gear. Skydiving also calls for individual training and regular parachute maintenance -- to say nothing of the logistics involved in evacuating a plane full of passengers in such a manner.

The ejection seat: This option generally remains the exclusive domain of military and experimental aircraft. While it was possible for the pilots of older, prop-driven aircraft to climb out of a plummeting aircraft, the pilots of high-performance jets require a fast, automated exit from a doomed aircraft. Ejection seats achieve this by simply blasting the pilot's or passenger's seat free of the plane. Then a parachute deploys to provide the necessary drag to slow the descent back to the surface.

The escape capsule: In extreme conditions, military or experimental aircraft feature escape capsules for pilots or crew members. The principle is the same as that of an ejection seat, only instead of jettisoning a pilot in a naked seat, it entails the ejection of a pressurized pod. Some aircraft designs even go so far as to eject entire crew cabins as a single, multiperson escape capsule.

If you absolutely have to leave an airplane midflight, wouldn't it be nice to leave in another airplane? Despite what you may have seen in movies, this generally is not an option. Numerous prototypes have explored the use of parasite vehicles (small aircraft that deploy from a larger plane midflight), but they generally involved the use of fighter aircraft. Plus, even if an aircraft had room to carry escape planes for its entire crew, a plummeting airplane would hardly allow for a leisurely departure.