Communication in the Skies 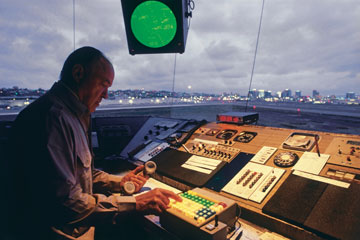 At the very beginning of this article, we discussed the thousands upon thousands of aircraft that fill the sky regularly. How do they avoid crashing into each other and landing without unleashing absolute chaos? Well, we have the field of avionics to thank.

Avionics entails all of an aircraft's electronic flight control systems: communications gear, navigation system, collision avoidance and meteorological systems. An overarching aerospace and air traffic control system ensures the safety of commercial and private aircraft as they take off, land and traverse vast distances without incident. Through the use of radar, computerized flight plans and steady communication, air traffic controllers ensure planes operate at safe distances from each other and redirect them around bad weather.

Needless to say, global air traffic control is a colossal task. It essentially involves governance of the skies, so we tackle that operation similarly to how we would on the ground: We divide things up. U.S. airspace, for example, breaks down into 21 air route traffic control centers (ARTCCs), each a designated territory that spans whole states and more. Internationally, you'll also hear these airspaces called area control centers (ACCs). Depending on a country's size, they may employ one or several ACCs.

If a flight takes a plane across several countries, it passes through various ACCs, each monitored by different air traffic controllers who give instructions to the pilot as needed. If a flight takes a plane into international airspace (the air above international waters), the crew will still depend on the assistance of an ACC, though the ground controllers may have to forgo the use of radar and depend on pilot reports and computer models. For a more in-depth look, read How Air Traffic Control Works.

Explore the links below to learn even more about aviation.