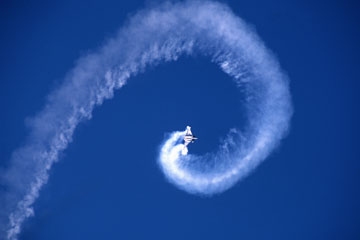 As we covered earlier, an aircraft's flight is a careful balance of thrust, drag, weight and lift. Should lift decrease and drag increase suddenly, such as when an aircraft's angle of attack surpasses that for maximum lift, a stall occurs. The airframe shakes and the plane falls, at least for a few feet. In most cases the pilot merely corrects for the stall by lowering the plane's angle of attack. However, an improperly corrected stall can result in a secondary stall, or degrade into a spin.

If you've ever attended an air show, you've probably witnessed stunt pilots intentionally entering into spins as part of an aerial acrobatics show. Typically, you'll see the prop-driven plane soar upward in a steep ascension, only to stall out and fall into a dramatic spin. The principles of an accidental spin are much the same.

A spin has three basic phases. The initial phase is called an incipient spin, in which the dropping aircraft starts to enter the spin. This phase lasts only a few seconds in light aircraft.

If uncorrected, an incipient spin degrades into a fully developed spin composed of a near-vertical helical flight path -- as if the plane is descending an invisible spiral stair. Such a spin can cost an aircraft hundreds of feet with every turn.

In a flat spin, the pitch and roll axes remain steady, with the spin occurring around the plane's center of gravity. In other words, the plane is mostly level as it falls in an extremely dangerous spin.

Most pilots aren't looking to take their passengers for a spin though. They're too busy manning the flight instruments we'll talk about next.