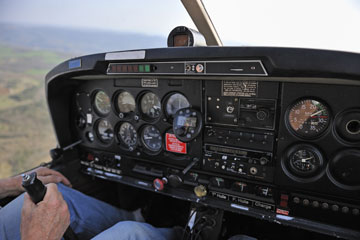 To the untrained eye, a panel of flight instruments may seem like a smorgasbord of dials. But all these crucial gauges provide a pilot with critical data during the flight. The six most basic flight instruments, as found in a simple prop-driven plane, are as follows:

The total number of flight instruments has increased over the years with the speed, altitude, range and overall sophistication of the aircraft.