Main-Belt Comets and Other Belts 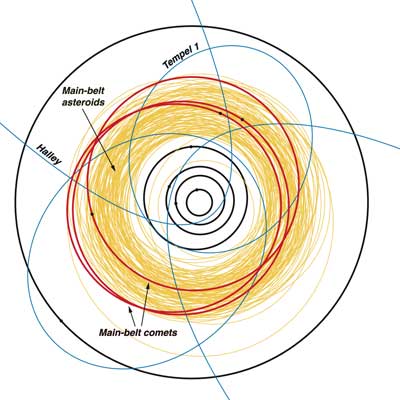 Although a main-belt comet behaves like regular comets by emitting a tail of gas and dust, its orbit is more like an asteroid's.
Pedro Lacerda/University of Hawaii

On Nov. 26, 2005, graduate student Henry Hsieh and Professor David Jewitt of the University of Hawaii made a startling discovery. Upon looking through an 8-meter Gemini North Telescope on the dormant volcano Mauna Kea, the two noticed a mysterious asteroid, Asteroid 118401, emitting comet-like dust. When they looked at two separate comets, they realized these three objects were neither asteroids nor comets, but a completely new category of comets -- main-belt comets.

Comets are simply big lumps of ice and dust moving through space. Heat from the sun causes the ice to evaporate, and a trail of gas and dust is left behind as the object moves through space -- that's why comets have tails. The orbit of a main-belt comet, however, is much different from that of a regular comet, which usually circles the sun in a tilted, highly elliptical fashion like a stretched-out rubber band. Instead, a main-belt comet travels a fairly circular, level orbit, much like an asteroid.

The biggest revelation coming from the discovery of main-belt comets is the possibility that an icy asteroid may have crashed into Earth and provided it with life. Astronomers originally believed ice from regular comets provided the Earth with its water, but recent discoveries have proved that comet water doesn't have much in common with our planet's water. If asteroidal water is anything like ours, main-belt comets may provide us with important insights into the Earth's formation and even our own existence.

Another discovery made in the same year suggests that there are other belts out there. Astronomers at NASA located what may be a massive asteroid belt around HD69830, a star 41 light years away that's closely related to our sun. This asteroid belt is either the same as our solar system's belt -- a collection of debris that was unable to form into a large body -- or the early stages of a new solar system. If it's the latter case, observing the belt may help us better understand the important process of planetary formation [source: National Geographic News].

To learn lots more about asteroids, space and space exploration, see the next page.

The Kuiper Belt is similar to the main asteroid belt in that it's another disc-shaped collection of leftover debris from the solar system's formation. The big difference is that it extends much farther out into space -- it begins past Neptune at 30 AU and reaches as far as 50 AU, or 7.5 million kilometers. It's often referred to as the "final frontier" of our solar system because it becomes increasingly difficult to measure the sizes of objects within or past this area. The debris that makes up the Kuiper Belt is also much colder due to the long distance away from the sun. The idea of the Kuiper Belt was proposed by astronomer Gerard Kuiper in 1951, but its existence wasn't confirmed until 1992 when astronomers observed the first Kuiper Belt Object (KPO).