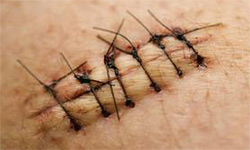 Someday those stitches may be made from a slow-degrading plastic called polycaprolactone.
DCL

Take polycaprolactone (PCL), a synthetic aliphatic polyester that isn't made from renewable resources but does completely degrade after six weeks of composting. It's easily processed but hasn't been used in significant quantities because of manufacturing costs. However, blending PCL with cornstarch reduces cost.

Biomedical devices and sutures are already made of the slow-degrading polymer, and tissue-engineering researchers dig it, too. It also has applications for food-contact products, such as trays.