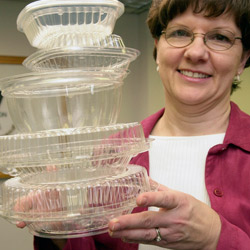 Producing plastic from processed corn may seem like a pipe dream, but it's happening every day. Polylactic acid, or PLA, is another aliphatic polyester and one that can be made from lactic acid, which is produced via starch fermentation during corn wet milling. Although most often generated from corn, PLA can be made from wheat or sugarcane as well

PLA looks and performs similiarly to the polyethlene used in plastic films, packing materials and bottles, and it can also be used as a substitute for the polystyrene used in foam food plates and containers and plastic cutlery. But unlike conventional petroleum-based plastics, PLA has some big advantages. For one, since it's made from plants that absorb carbon dioxide as they grow, there's no net increase in carbon dioxide from its raw materials. A 2017 study found that switching from conventional plastic to PLA would cut U.S. greenhouse gas emissions by 25 percent [source: Cho].

PLA has the advantage that it's quickly biodegradable, under the right conditions. If the plastic is sent to an industrial composting facility where it's continually subjected to heat and microbes, it can degrade in two to three months. If it's tossed in a landfill, though, it won't break down any quicker than conventional plastic [source: Isom and Shughart].