Hubble's Spacecraft Systems: Steering and Focusing the Eye in the Sky 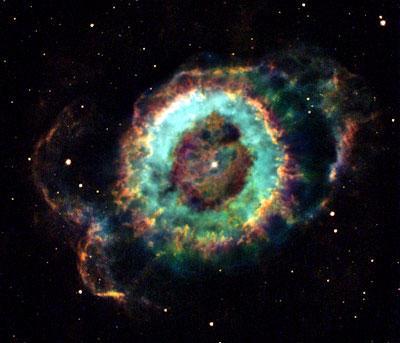 If Hubble couldn't focus, it wouldn't have been able to take this image of a dying star named NGC 6369 on Nov. 7, 2002.
NASA/Getty Images

­Hubble zooms around the Earth every 97 minu­tes, so focusing on a target can be difficult. Three onboard systems allow the telescope to remain fixed on an object: gyroscopes, the Fine Guidance Sensors that we talked about in the previous section, and reaction wheels.

The HST can't use rocket engines or gas thrusters to steer like most satellites do, because the exhaust gases would hover near the telescope and cloud the surrounding field of view. Instead, the HST has reaction wheels oriented in the three directions of motion (x/y/z or pitch/roll/yaw). The reaction wheels are flywheels, like those found in a clutch. When the HST needs to move, the flight computer tells one or more flywheels which direction to spin in and how fast, which provides the action force. In accordance with Newton's third law of motion (for every action there is an equal and opposite reaction), the HST spins in the opposite direction of the flywheels until it reaches its target.

Is there anything Hubble can't do?